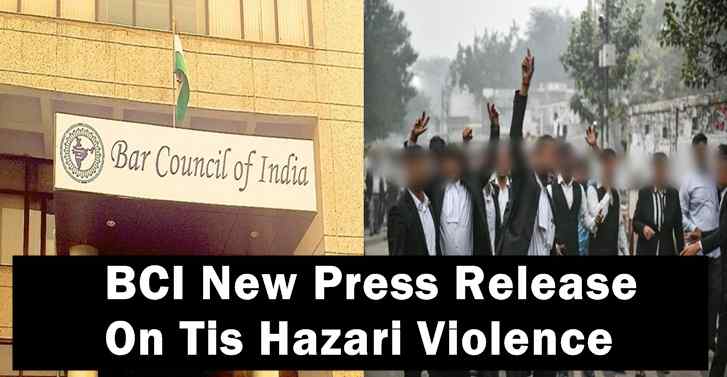 2. All the Presidents and Secretaries, All the District Bar Associations of Delhi

We have seen the media reports on yesterdays' umuly mob, protest and filthy slogans by Delhi Police. In our view it was the darkest day in the history of independent India. Certainly it seems to be politically managed move and it is very sad.

Earlier, Bar Council was trying to defuse the situation and already it had asked Bar Associations of Delhi to recall the strike. But, after seeing yesterday's conduct of the police personnel and the officers and their illegal, ridiculous demands, the Bar Council of India, which is the Apex Body of Lawyers, carn1ot sit tight over the matter.

The general public would not be able to understand/ realize the far reaching adverse effects of such protest and move of Delhi Police. The Policemen remained absent from their duty for about 11-12 hours, shouted slogans, used filthy languages(not only for the lawyers, but also for the law courts) and they threatened to smash and kill the lawyers openly. It has come in various media reports. Under Section-3 of the Police Forces (Restriction Rights) Act, 1966, this Act of Police is a serious offence athÂ·acting 2 years imprisonment. The Police Commissioner is to look into it.

The demands of the policemen that they shall withdraw from the security of the Hon'ble Judges and even of the Judicial Officers is really very disturbing for a demo cratic country like India; that too other demand is to allow them to forÂ  their union. In a country like ours, there is no place or permission in law for any union of police or armed forces. Thus, yesterday's behavior and conduct of the police is nothin g, but gross misconduct and dereliction of their duties.

The incident of police dharna was well-planned and the purpose was to threat not only the lawyers, but also the Goverrnnent and Judiciary. The Highest Police Officials and the Hon'ble Union Home Minister are to take this issue seriously. Those who indulged in firing and attempted to kill a lawyer are protesting for their protection and openly threatening the entire nation. We demand for the constitution of a HighLevel Committee to find out as to who all were involved in planning this illegal protest of police yesterday. The Bar and the people of this counh-y demand stern and shÂ·ong disciplinary action, the immediate suspension of those who participated in the dharna and the dismissal of those policemen who were/ are active in shouting slogans, abusing and threatening the lawyers and judges.

Unless the higher police officials and personnel, who were involved in incidents of 2nd November, 2019 at Tis Hazari Court Complex in the act of shooting are arrested and the policemen involved in yesterdays unruly acts are suspended and proceeded against, Bar Council of India will protest peacefully. Our demand is to arrest the guilty police officials within a period of one week, failing which we shall resort to peaceful dharnas for the arrest of these people and for proper disciplinary action against them. The Bar stands united. We also request the media to realize the adverse effect of highlighting the Hooliganism and protest of Indian Police and in the interest of the nation, as a member of intelligentsia, the learned media is supposed to restrict its coverage of such illegal and unconstitutional protests of Indian Police.

The Bar Council of India as the regulatory body was/is doing its duties and will do it in future too. But during the pendency of the case before the High Court, who authorized the police to lodge two false FIRs again for the incidents of Saket? The Video of Saket incident, even if taken to be true, shows it to be a case of simple hurt under Section-323 IPC, but the police has added offence of dacoity under Section 392 also. This is the conduct of police today. They are the law-breakers. We shall make our submission before High Court today and will abide by the Judicial verdict. In the meantime, we request the District bar Associations and Coordination Committee of Delhi Bar Associations to suspend the abstinence for 10 days and resume court works and if during this 10 days period, the culprits are not arrested, we shall decide the future course of action. In the meanwhile, we shall request to the court not to allow the vindictive police to lodge any case against lawyers, because, if it is allowed, they will resort to harassment of several innocent lawyers and their leaders in revengeful manner.