"What If It Was A Rich Girl": High Court Questions Hathras Cremation 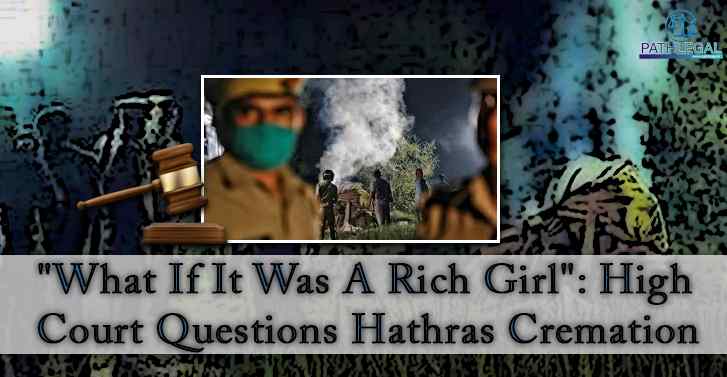 Questions about financial and class divide were brought up on Monday by the High Court in Uttar Pradesh, which was examining the conduct of the police in the Hathras case. The huge public condemnation of the police move for a 2 am cremation of the 20-year-old -- who died after brutal torture and alleged gang rape --- while keeping her family locked up, had brought the case under the scanner of the Lucknow Bench of the Allahabad High Court.

The district administration and the police have claimed that the call to cremate the body the same night was taken in view of the law and order situation.

The court on Monday questioned if the case would have been treated differently had the girl, instead of belonging to a poor family, came from a rich one.

"The court asked the District Magistrate - 'What if it was a girl from a rich family? Would you have cremated her the same way?" Seema Kushwaha, the counsel for the woman's family, told NDTV.

District Magistrate Praveen Kumar, who was among the officials summoned by the court, had accepted responsibility for the post-midnight cremation.

While taking up the case suo motu on October 1, the court had said it was ofÂ  "immense public importance" as it involves allegations of "high-handedness by the state authorities, resulting in violation of basic human and fundamental rights not only of the deceased victim but also her family members".

The reference was to the police move to keep the family locked up, refuse to allow them to bring their daughter's body home or give her last rites. The family had also objected to a night-time cremation, saying it was not allowed under Hindu rituals.

The court, in this context, had quoted a Supreme Court Order of 1995, where the judges ruled that the Article 21 of the Constitution which gives "Right to life", includes the "Right to dignity" which encompasses "fair treatment" to a dead body too.

Sources said the court is trying to determine three issues - whether there was violation of fundamental and human rights, whether the police followed Hindu rituals and whether it was done in a high handed and illegal manner. In case of wrongdoing, punishment will be given.

The court will hear the case again on November 2.

Additional Advocate General VK Shahi said they have also presented their views and in the next hearing, the court has summoned the Additional Director General (Law and Order) and the Special Secretary of the home department.

The woman, who belonged to Scheduled Castes, died on September 29 at a hospital in Delhi. The men accused in the case have denied all allegations. The forensic reports of the case - for which the samples were collected days after the alleged event - have negated rape.

"How do you know she wasn't raped? Has the investigation concluded? Please go through the new rape law of 2013," the court told senior police officer Prashant Kumar on Monday.