A Lawyer With No Caste And No Religion :First Indian Having This Certificate 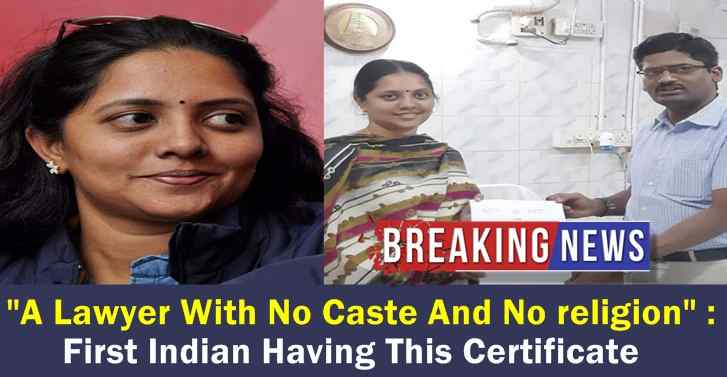 Sneha Parthibaraja, a 35-year-old lawyer from Vellore became the first woman to get an official 'no religion, no caste' certificate.

The caste system may have been legally abolished in 1950, but if you live in India, the box for you to fill in 'caste' and 'religion' is still present in a lot of forms. Some of these boxes on forms are also compulsory, and you do not always have the option of leaving them empty.

The closest option you get is 'Choose not to say' or 'Other' as an answer to these boxes.

A woman from Tamil Nadu, however, can now choose to not answer these on any forms as she officially has 'no caste, no religion.'

On February 5th, Sneha Parthibaraja, a 35-year-old lawyer from Vellore became the first person in the country to win the right to not have any caste or religion associated with her identity after a 9-year-old court battle.

Sneha was brought up in a family which neither believed in any caste nor religion. All her certificates, including birth and school certificates, have nil or are blank against the âcasteâ and âreligionâ columns. âThey mention me as an Indian,â she toldÂ The Hindu.

Sneha mentions that with every form that she filled, the mandated enclosure of community certificate made her realize she had to get an identity 'that was sans caste and religion.'

Parthibaraja began her fight in 2010 but all her attempts remained futile, as officials usually turned down on the basis of there beingÂ no precedentÂ in the country.

Finally, in 2017 Sneha submitted her last application and explained her stand to officials. She said that she didn't want to avail any government schemes or restrictions, and hence, her request should be granted.

On February 5th, Sub-Collector, Tirupattur, B. Priyanka Pankajam finally decided to give her the âno caste, no religionâ identity certificate. âThough we found no precedent, we decided to go ahead and certify her as it will not affect anybody or take away another personâs opportunity,â sheÂ said.

Kamal Hassan and others congratulated her on Twitter for finally having no caste or religion attached to her identity.