A Senior Supreme Court Lawyer Found Dead In Her House 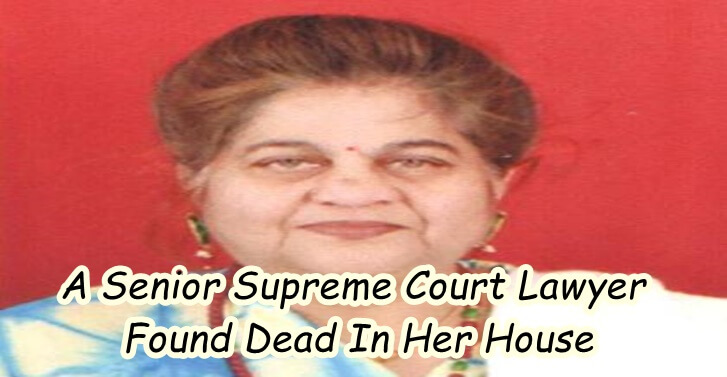 Kuljeet Kaur, a senior Supreme Court lawyer, was found dead in her house in Sector 31 of Noida on Tuesday evening, with blood oozing from her nose & a cloth wrapped around her face. Police believe she was murdered, & the needle of suspicion has fallen on Kaurâs domestic help Sneha, who has gone missing. Police said Kaur had only recently employed Sneha, & her husband too is untraceable.

Kaur had been living by herself since her husband, lawyer Navjot Singh, passed away on December 22 last year. They didnât have any children. Kaur was found dead by her younger sister Divya, who found the doors of the Block B house open, the almirahs ransacked & Kaurâs sedan gone when she came to the house around 7.30pm on Tuesday. Divya lives in Delhiâs Shastri Nagar. The sedan, a Honda City, would be usually parked outside the house. Kaurâs jewellery was also taken, all indications that robbery might have been the motive behind the murder.

The Supreme Court Bar Association (SCBA) reacted strongly, urging chief minister Yogi Adityanath to intervene & order a probe to âunearth the conspiracy behind the caseâ. Recalling the murder of Darvesh Yadav, the first woman chairman of the Bar Council of UP a month ago, the SCBA said the latest incident âexposes the serious slackness in the law-and-order situation of Noida, the flagship city of the stateâ.

Kaurâs family members said they had last spoken to her at 6.30pm on Monday after which she could not be contacted. Sapna, Kaurâs youngest sister, told that Sneha had been employed a week ago & stayed in the servantâs quarter. âWe donât know about her husband. He was not employed by Kuljeet. He would come to the quarter at night,â Sapna said.