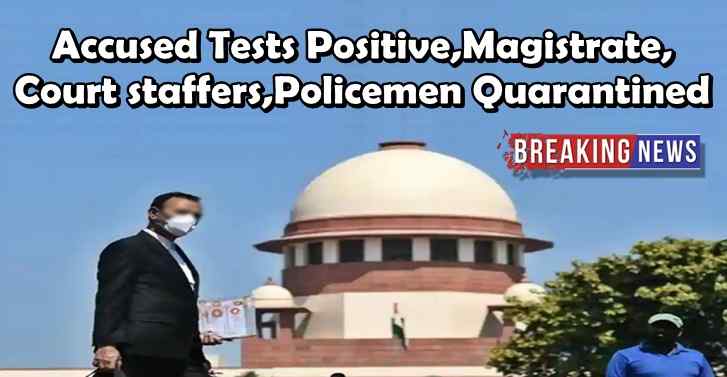 Mumbai, April 27 (IANS) At least 22 persons, including a Magistrate, court staffers and police personnel have been quarantined after a person accused of theft and break-in tested COVID-19 positive, official sources said here on Monday.

The accused was caught breaking into a closed shop to steal cigarette packets on April 21 in Bangur Nagar, Goregaon suburb, during lockdown.

However, a police patrol team caught him red-handed and later found that he had been externed from Mumbai earlier for other crimes.

He was produced before a Holiday Magistrate in a suburban court the next morning, which sent him to police custody.

The accused was driven in a police van to the Thane Central Jail, but since Thane Jail was packed to capacity, he was taken to Taloja Central Jail in Raigad.

The Taloja Central Jail authorities refused to take him without undergoing a Covid-19 test, so the accused was brought to Sir J. J. Hospital in Mumbai where he turned out to be positive on Saturday (April 25).

This created panic in the Bangur Nagar Police Station and the other places where the accused had travelled with different police escorts for three days, making them all high-risk contacts.

Finally, in consultation with the health authorities, a Magistrate, over a dozen police personnel and court staffers have been sent to ''home quarantine'' for 14 days, said an official, requesting anonymity.

The incident came against the backdrop of two police personnel losing their lives to coronavirus on Saturday and Sunday sending shockwaves in the police force.

This incident has also created a fear psychosis among the police personnel and court staff dealing with persons accused in different crimes who are produced before them regularly.