Advocates can move contempt petitions against improper behaviour of judges 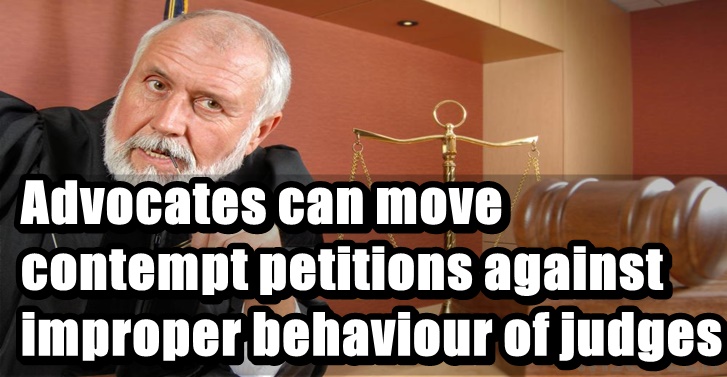 Advocates can move contempt petitions against improper behaviour of judges

A.I.R. 1949 Lahore-470
In this case a magistrate called an advocate, This foolish advocate and the magistrate was found guilty of contempt and sentenced to imprisonment. Even if a judge ill-treats a witness it amounts to contempt. Advocates should move contempt petitions against improper behaviour of judges, instead of calling for boycott of courts.It is better to make a fair comment in writing about the contemptuous behaviour of the judge and give it to the judge before filing a contempt petition. If the judge apologizes the advocate may give him a second chance. Introducing mandatory video record of all court proceedings will facilitate proof in such cases.
Harish Chandra Mishra And Ors. vs Hon'Ble Mr. Justice Ali Ahmad on 28 September, 1985
Equivalent citations: 1986 (34) BLJR 63
Author: N Singh
Bench: N Singh, S Choudhuri, U Sinha, B P Sinha, P Sahay
JUDGMENT N.P. Singh, J.
1. Three Advocates of this Court have filed this application alleging that a Judge of this Court has committed contempt of Court by making, insulting and uncharitable remarks against an Advocate Dr. Sadanand Jha. While hearing a civil revision application for admission.
2. The civil revision application had been listed before S. Ali Ahmad, J., a Judge of this Court (hereinafter to be referred to as 'the opposite party' for admission on 19.7.1985. According to the petitioners' after the luncheon interval when the opposite party took his Seat Mr. Syed Imam Ali, Advocate mentioned to the court a caveat petition and an affidavit had been filed on behalf of opposite party No. 3 of that case, and, as such, the petitioner of that civil revision application be directed to hand over a copy of the petition to the caveator so that a proper counter-affidavit may be filed. He also made a prayer for adjournment of the case for a week. On this the opposite party asked the counsel for the petitioner of that case as to whether he was agreeable to the suggestion made by Mr. Syed Imam Ali. Mr. Naseem Ahmad, who appeared for the petitioner of that application, replied that he will have no objection to the adjournment, provided the operation of the order under revision was stayed. Then Mr. Syed Imam Ali said that the opposite party No. 3 had already come in possession, and, as such, staying the operation of the impugned order shall not be fair and only an order for maintaining status quo be passed. The counsel for the petitioner did not agree to this suggestion. On that the opposite party said that he shall pass the order when the case shall be called out in its natural turn. It has been stated that apart from Mr. Syed Imam Ali, Dr. Sadanand Jha, petitioners 1 and 2 had also been engaged on behalf of opposite party No. 3 aforesaid. When the case was called out for admission Mr. Balbhadra Prasad Singh, Senior Advocate, addressed the Court on behalf of the petitioner of that application and gave the background under which the civil revision application had been filed. The opposite party then called upon Mr. Syed Imam Ali and asked him whether he wanted time in that very case which was replied in affirmative. The opposite party then observed that if he adjourned the case for a week then he shall stay the operation of the impugned order. Upon this Mr. Syed Imam Ali again requested that only an order for maintaining status quo be passed because opposite party No. 3 had already come in possession. The opposite party replied that he usually did not pass status quo orders as he himself did not know what was meant by status quo. On this Mr. Syed Imam Ali prayed that the application itself be heard on merit because it was not maintainable. Thereafter, Mr. Balbhadra Prasad Singh resumed his argument. What happened thereafter has been stated in paragraphs 14 and 15 of the present application which are as follows:
14. After Mr. Balbhadra Pd. Singh finished his arguments, S. Ali Ahmad, J. started dictating the orders that Sri Syed Imam Ali put an appearance on behalf of Opposite party No. 3, the petitioner should give a copy of the petition to him and the case be adjourned to the 30th of July, 1985 in the mean time the operation of appellate judgment shall remain stayed. Mr. Syed Imam Ali then stood up and said that the civil revision may be heard for admission matter on Tuesday or Monday itself, but the counsel for the petitioners, Sri Balbhadra Pd. Singh said that he will be at Ranchi in the coming week. At this stage Dr. Sadanand Jha, an Advocate on behalf of the opposite party No. 3 got up and prayed to the court that if stay of the operation of the order is in question, the civil revision application itself may be heard on merits for admission and it should be either admitted or dismissed. S. Ali Ahmad J. remarked that an option had already been given to Mr. Syed Imam, Ali as to whether he would like adjournment with stay or arguments on merits for admission. Upon this Dr. Jha replied that Mr. Syed Imam Ali had already stated that if stay is to be be granted then they should be heard and the civil revision may either be admitted or dismissed' and only upon his saying so Mr. Balbhadra Prasad Singh was called upon to resume his argument and therefore the revision be heard on admission matter on merits. S. Ali Ahmad, J., then remarked to Dr. Jha 'You are present in the Court physically, but mentally you are elsewhere and therefore you missed my observation". Dr. Jha then replied "My Lord, It is really uncharitable that your Lordship say that I was Present in the Court physically but was mentally some where else. I was both physically and mentally present in the Court.

15. S. Ali Ahmad, J. became very angry upon this and he stated that 'It has become your habits to insult the Court'.
Dr. Jha said upon this that 'It has never been my practice or intention to insult any judge'. S. Ali Ahmad J. was so flared up at this that he said Peshkar call the constable, I will have him arrested'. After this S. Ali Ahmad, J., spoke for about 10 minutes in which he used the following terms and expressions towards Dr. S. N. Jha advocate--
You are a small fry and I would not even like to harm you because you are such a small fry. You have no knowledge and no understanding. With your habits you are doomed. I will not harm you but you will suffer from within and be doomed. I can tolerate a lot but there is a limit to it and once the limit is reached I am a very hardnut and remember that, I tell you that you will suffer internally and be doomed. Now-a-days it has become the faishon of the Bar to insult the judges. I tell you, you will weep. You cannot call me dishonest and partial'. These words 'dishonest and partial', were used by justice S. Ali Ahmad even though these were never used or meant by the counsel. Dr. Jha at this stage said 'I am sorry'. S. Ali Ahmad, J. again said 'You should be sorry and you would be sorry and again he said that 'you will suffer and you are doomed. Do not think with this attitude you will flourish or prosper.
Many of these expression were repeated several times, and lastly at about 3.35 P. M. he ordered that the civil revision be listed before another Bench, he rose up and left the Court.
According to the petitioners, the opposite party by the aforesaid remarks made by him has committed contempt of his own court by interfering and obstructing the administration of justice.
3. It was essential to preserve the discipline, while administering justice, was realised centuries ago when Anglo Saxon Laws developed the concept of contempt of court and for punishment therefor. The acts which tend to obstruct the course of justice really threaten the very administration of justice. By several pronouncements such acts which tend to obstruct or interfere with the course of justice were identified and were grouped into 'civil contempt' and 'criminal contempt'. However, for a long time they were never defined leaving it to the courts to give their verdict whether under particular set of circumstances any such offence has been committed or not. Even in India in the earlier two Acts of the years 1926 and 1952 relating to Contempt of Courts the expression 'contempt of court' was not defined. However, in the Contempt of Courts Act, 1971 (hereinafter to be referred to as 'the Act') the Parliament has purported to define 'civil contempt' and 'criminal contempt' separately. The Act has also introduced several new provisions under different sections, including prescribing the procedure for initiating proceedings for contempt. The relevant part of Section 15(1) with which we are concerned is as follows:
15. (1) In the case of a criminal contempt other than a contempt referred to in Section 14, the Supreme Court or the High Court may take action on its own motion or on a motion made by--
(a) the Advocate-General, or
(b) any other person, with the consent in writing of the "Advocate General". On a plain reading, in respect of criminal contempt, the Supreme Court or a High Court may take action on its own motion or on a motion made by the Advocate General or any other person 'with the consent in writing of the Advocate General'.
4. The present application has neither been filed by the Advocate General nor with his consent in writing. According to the petitioners the requirement of the consent in writing in Section 15(1)(b) is directory in nature and that shall not be bar to the maintainability of the application specially when the application has been filed on behalf of some of the Advocates of this Court. In this connection reference was made to a judgment of the Karnataka High Court in case of S.N. Nagaraj v.
Chikkachennappa 1981 Cr.L.J. 843 where it was observed that Section 15(1) was not couched in a negative language stating that no motion by a person other than the Advocate-General shall be entertained by the High Court without the consent of the Advocate-General; as such it was not intended to preclude the High Court from entertaining a petition filed by the aggrieved person. But at the same time it was also pointed out:

By construing Section 15(1)(b) as directory, we do not mean that the provision should be ignored or that the consent of the Advocate General provided for in Section 15(1) is of no importance at all. It is well settled that a directory provision also must be given due weight and should not be rendered useless. Therefore, having due regard to the purpose with which the above provision has been made, in all cases of motions made under Section 15(1)(b) of the Act where consent of Advocate-General is not obtained or it has been refused, the Court should take that circumstace into account. The Court may reject a petition presented without consent of Advacate-General or where consent has been refused, in limine.


Click the image to read more: Is A Summons Case And A Warrent Case Conveys The Same Meaning?