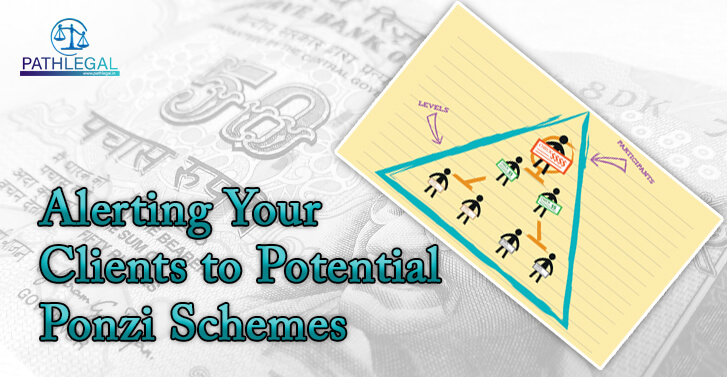 Clients often come to Advocates for a particular need. Then if the Advocate adds value to the relationship through additional services, itâs very likely that the Client will enter a long term relationship with the Advocate.

This is good for the Client, as any mutually beneficial long term relationship is. It is also good for the Advocate, as a Long Term Client (âLTCâ) is a satisfied fee-paying client.

One way to add value for the LTC is to advise them of various Government regulations or corrupt business practices that might harm them financially. Having details of some potentially harmful activity is guaranteed to build a successful long term relationship with the Client.

Here is an example of the proverb: âIf itâs too good to be true, it most certainly is.â This September, in Ernakulam, there was a crackdown by the police on Kerala-based Non-Banking Financial Company (âNBFCâ) Popular Finance. This widely advertised finance company was revealed as a Ponzi scheme.

A Ponzi scheme is where money is brought in by new investors to pay off the old investors. The Popular Finance owners also used the parent company as a cover to dupe investorsâ deposits through an elaborate scheme involving shell companies, according to the police.

There were many danger signs, the kind that an experienced Attorney would immediately flag if aware of the potential interest of the Long Term Client. In this short history of Popular Finance, see how many you can spot.

The company, headquartered in remittance-fuelled Pathanamthitta district, collected aroundÂ â¹2,000 crore from thousands of investors, many of them NRIs, in 274 branches in Kerala, as per the police. (1. Grew too fast without visible income sources other than deposits.)

The alleged fraud was exposed when a large number of savers decided to withdraw their money amid covid-19 induced financial crisis. While Popular Finance failed to deliver promised returns, it also shuttered its branches leaving thousands of depositors in the lurch.

Popular Finance has been offering gold loans as a Non-Banking Finance Company (NBFC) since 1965 (2. Gold loans are always dangerous especially if high returns are promised.) The lender's business came to a halt in 2014 when the Reserve Bank of India flagged it for collecting fixed deposits while they were only a licensed moneylender under Kerala Moneylenderâs Act (1958). (3. RBI flagging of operations of any finance company. Get your money out fast.) Â

The promoters got investors to deposit money under the brand of Popular Finance, while actually the company did not take deposits. The money was deposited in shell companies. The investors were asked to send money through RTGS to the account number of the shell companies. In the receipts to the investors, it was marked that their money was received in return for buying shares of these firms.

The unsuspecting investors were aiming for high returns for their deposits. The firm offered interests in the range of 12-15%, more than what is offered by the banks (4. Always a red flag.)

Huge deposits were taken and used it to pay interests to the same investors. When the deposits matured, the Promoters started giving excuses to delay repayment. (5 Always ask to see audited financial returns and also talk to the Bank of the Company if you plan to invest large sums.) Once several investors were delayed repayments, people created an uproar and it resulted in the police cases.

In interviews with local news channels, some investors said they were offered a return as high as double their investment, for a minimumÂ â¹5 lakh deposit, within six years. Lawyers in India can provide further details.