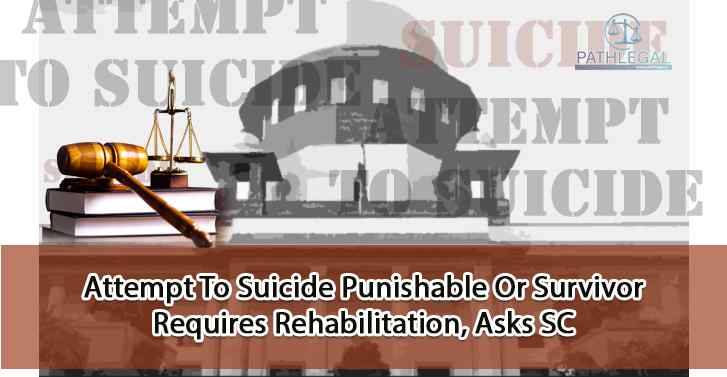 Should the survivor of a failed suicide bid be punished as per section 309 ofÂ Indian Penal CodeÂ or be rehabilitated with care by government under Section 115 of Mental Healthcare Act? Which of the two provisions is constitutionally sound, the Supreme Court on Friday sought to know from the Centre.

Acting on an innocuous plea of an animal right NGO seeking measures to prevent persons attempting to commit suicide by jumping into animal enclosures in zoos, a bench of Chief Justice S A Bobde and Justices A S Bopanna and V Ramasubramanian said it noticed the dichotomy between Section 309 IPC and Section 115 of MH Act and asked solicitor generalÂ Tushar MehtaÂ to get response from the Union government.

The SC said this dichotomy would be addressed along with the pending issue of testing theÂ constitutional validityÂ of Section 309. The debate on ethicality and legality of punishing the survivors of suicide bid has led toÂ several jurisdictionsÂ across the world decriminalising the offence, which continues to attract punishment under the 160 year-old IPC. However, in 2018, the SC in a landmark judgment had said SC's 1996 judgment in Gian Kaur case saying "the right to live with dignity did not include the right to die" required reconsideration.

As per IPC, a suicide survivor is liable to criminal punishment. This is a bizarre penal provision, which is at variance with the 21st century zeitgeist. Decrimininalisation of âattempt to suicideâ by scrapping Section 309 of the IPC is the best way to rectify the contradiction between the two laws.

While Section 309 of IPC provided that "Whoever attempts to commit suicide and does any act towards the commission of such offence, shall he punished with simple imprisonment for a term which may extend to one year", Section 115 of MH Act said, " Notwithstanding anything contained in section 309 of the Indian Penal Code any person who attempts to commit suicide shall be presumed, unless proved otherwise, to have severe stress and shall not be tried and punished under the said Code."

Section 115(2) also said, "The appropriate Government shall have a duty to provide care, treatment and rehabilitation to a person, having severe stress and who attempted to commit suicide, to reduce the risk of recurrence of attempt to commit suicide." The bench's order said, "Issue notice to the Attorney General for India, calling upon the Union of India to justify the validity of section 115 of the Mental Healthcare Act, 2017 which virtually negates section 309 IPC." The SC appointed senior advocate A N S Nadkarni asÂ amicus curiaeÂ to assist the court.

On March 9, 2018, a five-judge constitution bench had permitted passiveÂ euthanasiaÂ for persons in vegetative state and validated living will. One of the Judges in the bench, Justice D Y Chandrachud, had said the punishment for failed attempt to suicide "may require to be revisited in future in view of domestic and international developments pointing towards decriminalisation of suicide."

He had said, "It (the MH Act) regards a person who attempts suicide as a victim of circumstances and not an offender, at least in the absence of proof to the contrary, the burden of which must lie on the prosecution. Section 115 marks a pronounced change in our law about how society must treat and attempt to commit suicide. It seeks to align Indian law with emerging knowledge on suicide, by treating a person who attempts suicide being need of care, treatment and rehabilitation rather than penal sanctions." He had said this issue of whether right to life includes right to die has to be decided in a separate proceeding.

It appears the separate proceeding, which Justice Chandrachud had talked about two and half years ago, is about to commence.