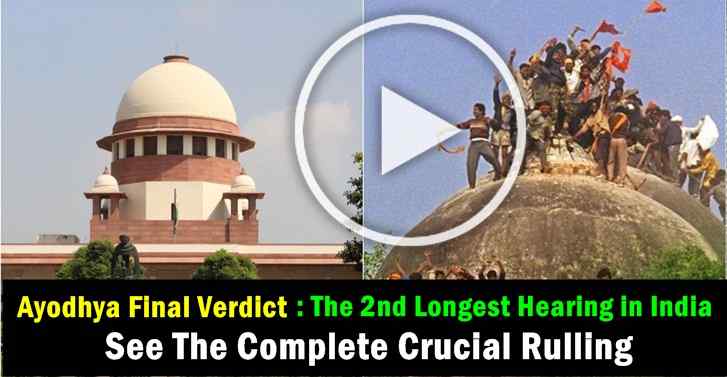 Ayodhya Verdict Live Updates: Bringing down curtains on the Ram Janmabhoomi-Babri Masjid issue, one of the longest running title disputes in India, the Supreme Court has given the entire disputed 2.77-acre land to the Hindu parties with a trust to be formed by the Centre within three months to monitor the construction of a Ram Temple. The Sunni Waqf Board will be given 5 acres of alternate land, a five-judge bench of the Supreme Court ruled in the unanimous verdict. The Nirmohi Akhara also suffered a setback with the court saying it is not a âshebaitâ or devotee of the deity Ram Lalla. The CJI Ranjan Gogoi-led bench of Justices SA Bobde, DY Chandrachud, Ashok Bhushan and S Abdul Nazeer, said the Akhara's suit was barred by limitation.

The Ayodhya title suit verdict comes nine years after the 2:1 judgment of the Allahabad High Court that ordered a three-way division of the disputed 2.77 acres of land between the three parties â Ram Lalla, Sunni Waqf Board and the Nirmohi Akhara. The Lucknow Bench of the High Court, on September 30, 2010, held that Hindus and Muslims as joint title holders of the disputed land.

Former RSS ideologue K N Govindacharya, a key figure in the Ram Janmabhoomi movement, on Saturday credited late VHP stalwart Ashok Singhal and veteran BJP leader L K Advani for the success of the cause. Reacting to the Supreme Court clearing the way for the construction of a Ram Temple at the disputed site in Ayodhya, Govindacharya, one of the major strategists behind the Advani's rath yatra in 1990 in support of building a temple, expressed his "extreme happiness" at the verdict. "I am extremely happy. Now, in three months a plan will be made for constructing the temple," he said, asserting that social harmony must be maintained so that the country can move from "Ram temple to 'Ram rajya'."

Gilani says, "We will speak to lawyers, including Rajeev Dhawan, and take a call on whether to take a review or not. It is unjust. I appeal to the countrypeople to maintain peace and tranquility. Whatever legal course is there we will adopt as we are dissatisfied with some protions of the judgment, not up to our expectations. Land of mosque, even of inner courtyard, in which prayers were offered, that too given to other side, can't consider it equity nor justice. It can be helpful for entire judgment. We are not worried about the outer courtyard, there was chabutara there, we were concerned abuot inner courtyard. according to our shariat we can't give away masjid. When Supreme Court acknowledged that there was Masjid there, how can you give it away to the other party?"

Zafaryab Jilani said, "We respect the Supreme Court's judgment and appeal for peace. No protest should happen anywhere. It's not a defeat. Whatever legal course is possible we will find that. The judgment is not satisfactory from the fact that the land of the courtyard has been given to other side. We will discuss if the review will be filed or not."

Security Beefed AroundÂ Jama Masjid in Delhi |Â In view of the Ayodhya verdict, the security has been beefed up around the Jama Masjid area and parts of Old Delhi, police said. Shops were open in the area but the situation remains tense. Police presence has been increased.Â  Delhi Police's Vajra Van and police personnel in two buses have been stationed outside the mosque to deal with any situation. According to a police official deployed outside the Jama Masjid, police personnel have been asked to remain vigilant. "In comparison to other days, security has been increased," a local said.

The press conference conducted by the All India Muslim Personal Law Board begins after the Supreme Court's judgment on the AyodhyaÂ land dispute case.

Hailing the Supreme Court ruling on the Ayodhya title dispute case as 'historic', defence minister Rajnath Singh says, "I believe this is a landmark judgement. Everyone should accept and respect it. I would appeal to people to maintain peace and order."

Meanwhile, prohibitory orders have been issued across Delhi to maintain public order

Crux of the Ayodhya Verdict:Â The disputed land in Ayodhya goes to the Hindus in its entirety for the construction of Ram Mandir. The Sunni Waqf Board will get five acres of alternate land, which will be accorded either by the state or the Centre.

The CJI is reading out allÂ pointers:

- Under Article 142, SC directs in the scheme to be framed, Nirmohi Akhara to also get representation

- Land to remain vested in statutory receiver till trust is formed

- Trust to be formed in three months

The CJI is reading out all pointers:
- Hindus to get land subject to conditions
- Central government to frame a scheme
- A trust will be formed
- Inner courtyard will be handed over to the trust
- A suitable plot of land measuring 5 acre shall be given to Sunni Waqf Board
- Centre must set a trust with board of trustees within 3 months

Muslim parties to getÂ alternate land, rules CJI-Led Constitution bench of the Supreme Court. "Since the Babri mosque was brought down, Wrong committed must be limited," it says.

The CJI-led Constitution bench of the Supreme Court says that all forms of beliefs equal for Constitution. "Constitution speaks through judges. Worship of inner courtyard continued by Hindus even when in possession," the top court says.

The Muslims Sunni Waqf Board couldn't establish adverse possession on the disputed site. The disputed site is one composite whole, says Supreme Court. "No namaz after 1949," the SC adds.Â