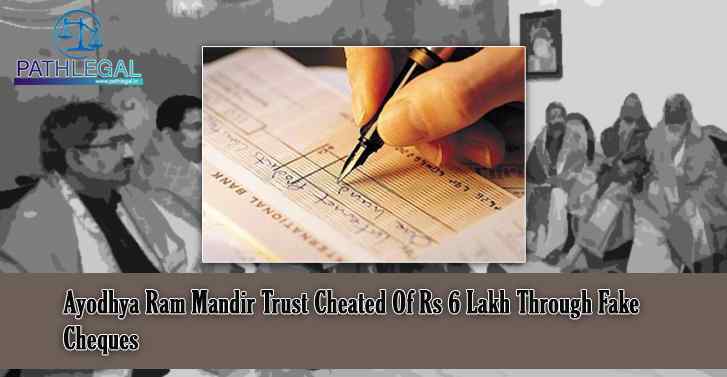 Shri Ram Janmbhoomi Teerth Kshetra Trust in Ayodhya has been defrauded of Rs 6 lakh through two fake cheques and the fraud was detected during the verification process of a third fake cheque, said police on Thursday.

According to the police, trust secretary Champat Rai filed an FIR with the Ayodhya police. However, no arrests have been made in this case yet.

"However, when another cheque for Rs 9.86 lakh was presented to the Bank of Baroda on 9 September, the bank called Champat Rai for verification. Rai browsed through the chequebook and found the cheque bearing that number was still in his possession, so he decided to file an FIR with the Kotwali police station Wednesday night," he added.

We are investigating the case and accused person will be arrested soon, Mr Kumar said.

Deenanath Verma, accountant of the trust said that Rs 4 lakh were stolen and trust was able to manage to save Rs 2 lakh during the fraud.

"Somebody tried to stole money through two fake cheques--one of Rs 3.5 lakhs and one of Rs 2.5 lakhs. They have withdrawn Rs 4 lakh already. We have stopped further transactions for few days and saved Rs 2 lakh. We got to know about the fraud when a cheque of Rs 9,86 lakh was presented to the Bank of Baroda and bank called us," he said.

On September 4, the Ayodhya Development Authority (ADA) has handed over the approved design of the Ram Janmabhoomi temple being constructed in Ayodhya to the Ram Temple Trust.