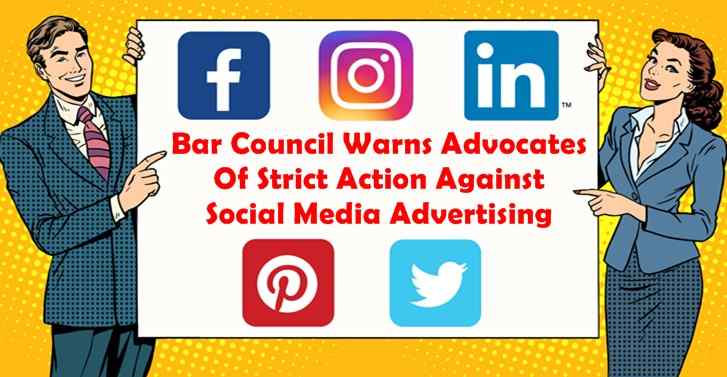 The Bar Council of Punjab and Haryana issued a warning to its registered advocates on Wednesday for allegedly resorting to unethical ways of advertising to solicit work on social media websites, such as Tik Tok, Instagram,Â Facebook.

Chairman of Bar Council of Punjab and Haryana, Karanjit Singh said, âDuring the lockdown period, when the courts were not functioning, the advocates were found to be involved in unethical practice of advertising themselves on social medial platforms. We have found 4-5 advocates who were involved in the unethical practice of advertising themselves through social media, while several complaints have also been received. The concerned advocates were summoned and issued a warningâ.

Bar officials had brought the matter to the notice of the house that many advocates are resorting to unethical ways of advertisement to solicit work by making videos and uploading them on Facebook and WhatsApp groups and getting their names published in newspapers with reference to cases.

During the house meet, it was unanimously resolved that any advocate resorting to advertisement through social media, in violation of the Rule 36 framed by the Bar Council of India in Section IV under the heading âduty to colleaguesâ, will be considered as a misconduct under the Section 35 of the Advocates Act, 1961.

âThe mandate of the Rule 36 prohibits an advocate from soliciting work or advertising, directly or indirectly by any means of circular, advertise, touts, communications etc, any such violation would be considered as a misconduct U/s 35 of Advocates Act, 1961. If any instance is complained of or comes to the notice of the Bar Council, suo-moto action be taken against that advocate,â said the Chairman of Bar Council of Punjab and Haryana.