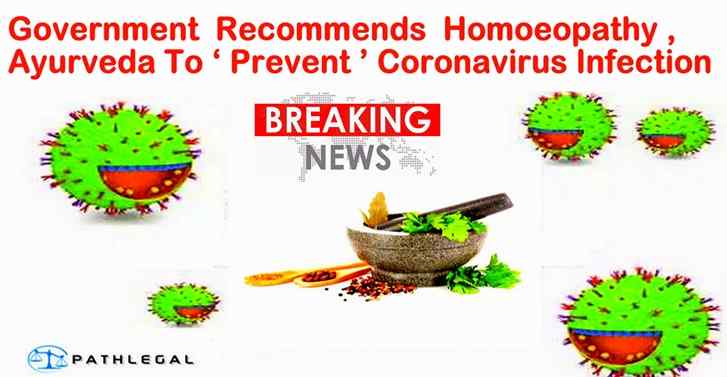 With theÂ world gripped by the contagion of the novel coronavirus strain from ChinaÂ that has so far claimed at least 130 lives and infected 6,000 people across the world, Indiaâs Ministry of traditional medicine or AYUSH (Ayurveda, Unani, Siddha, Homeopathy) on Wednesday issued an âadvisoryâ advocating preventive treatment against the viral infection. The note was widely circulated via the official Press Information Bureau.

Drink Shadang Paniya (Musta, Parpat, Usheer, Chandan,Udeechya & Nagar) processed water (10 gm powder boiled in 1-litre water, until it reduces to half). Store it in a bottle and drink it when thirsty....avoid close contact with people...If you suspect Corona Viral infection, wear a mask and contact your nearest hospital immediately,â reads the Ayurveda section of the advisory that also suggests, â....wearing an N95 mask when travelling or working in public spaces to avoid droplet transmissionâ.

The same advisory also lists a host of preventive steps according to the tenets of Homoeopathy and prescribes âArsenicum album30â that could be taken as âprophylacticÂ medicineÂ against Coronavirus infections.â The Homoeopathy recommendation came after the AYUSH Ministry had a meeting on Tuesday with the Central Council for Research in Homoeopathy to discuss how Homoeopathy could be used to treat a coronavirus infection.

The World Health Organisation prescribes no medicine or treatment to deal with a coronavirus infection and recommends generic measures such as using an alcohol-based hand rub or soap and water, avoiding close contact with those with a cough and cold, and avoiding the consumption of raw or undercooked animal products.

The AYUSH advisory was issued in the morning.

âThis advisory is ill advised. To claim preventive efficacy/symptomatic management without any kind of evidence when not a whole lot is known about the virus,& there is a chance of rumour-mongering and panic, reflects poorly on the AYUSH ministry,â Anant Bhan, a prominent bio-ethicist and health policy analyst tweeted.

The head of the Indian Medical Association (IMA), a leading association of doctors, described the Ayush Ministry advisory as âquackeryâ. âThe strains of coronavirus undergo mutations and changes. How can a generic treatment advisory be given?â Rajan Sharma, President, IMA toldÂ The Hindu. âSeveral of the prescriptions are a part of culture but shouldnât be given out as treatment advice.â

Later in the day, the Ayush Ministry modified its advisory but left the recommendations largely untouched. âAYUSH system is based on traditional health practices. The traditional Healthcare system of the country provides lifestyle advocacies to boost immunity which helps the prevention of various kind infectious diseases. Recently, the outbreak of corona virus has been noticed which mainly involve Respiratory system. The Ministry of AYUSH is issuing the advisory as preventive measure and not claiming to be a treatment advice for the Corona virus infection,â it noted.