CAA & NRC: A Toxic Cocktail For Every Indian Citizen 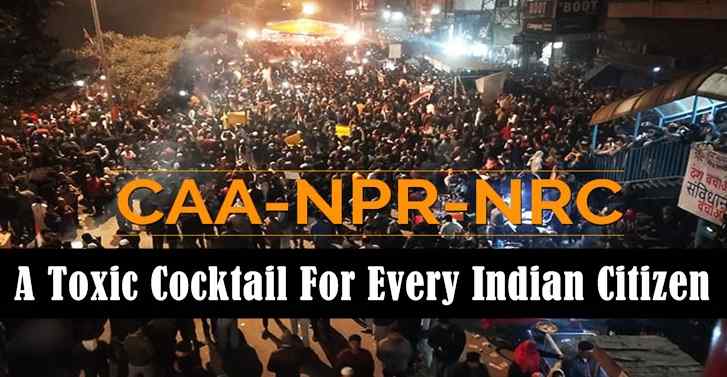 The Citizenship Amendment Act is based on religion, with a thrust on exclusion of Muslims from those immigrants from Indiaâs three Muslim-majority neighbours â Pakistan, Bangladesh and Afghanistan â seeking Indiaâs citizenship. But National Register of Citizens is not based on religion. It seeks to detect any illegal immigrant, regardless of their caste, creed or religion and detain and eventually deport them.

There are two kinds of protests that are taking place across India right now against the Citizenship Amendment Act. In the northeast, the protest is against the Actâs implementation in their area. Most of them fear, if implemented, a rush of immigrants may alter their demographic and linguistic uniqueness. In the rest of India, like in Maharahstra, Gujarat, UP, Karnataka, Kerala, West Bengal and in Delhi, people are protesting against the exclusion of Muslims, alleging it to be against the ethos of the Constitution. But this protest, unlike in the northeast, is primarily driven by the fear that the CAA will work against Indian Muslims, which in turn stems from the flawed linking of the Act with NRC.

Is it against Indian Muslims?

There is a perception that has gathered steam that the CAA will deny rights to Indian Muslims. The truth is, the Act canât do it even if anyone tries to. This perception is due to a connection made between CAA and proposed nationwide NRC. While the CAA makes it easier for the non-Muslim immigrants from Indiaâs three Muslim-majority neighbours â Pakistan, Bangladesh and Afghanistan â to become citizens of India, it cannot take away the citizenship of Indian Muslims. Even a proposed pan-India NRC can only detect illegal immigrants and detain them, who can be from any faith. Moreover the nationwide NRC is still at a proposal stage.

How many illegal immigrants in Indiaâ¦No Idea. As from example of Assam, how many Hindus illegal immigrants. Much in number as seen from NRC exercise in Assam. How may Muslims, less. NRC in Assam shown most are Hindus and thatâs why CAB got dotted. Government agencies saying very difficult in future to decide religious persecution.This discriminatory CAB along with NRC will create chaos in society and much trouble. I feel nothing will come out of same.

Itâs Vote Bank Politics by all political parties, Divide and Rule, this is creating unrest in society. The consequences obviously will surface many critical issues in coming days. Ultimately we all citizens, our families, children, kidâs life, peace, and future will be at stake in this whole exercise, which actually not in the interest of people. There are other ways, laws in existence by which illegal immigrants can be thrown out or detained and that is happening all the time with present laws.

We decided to be secular. Where are we? We have vibrant Democracy and we are developing nation. If we want to be on religious lines how our fate and future will be god knows.

Will not it be the same nightmare as Demonetization for the whole country?

Government will not take Act back. Its time for Supreme Court now to decide rhe fate of this act and also the fate of changing scenarios in India. But people should first read and understand before real law or act past by parliament be it CAA or NRC or even related to anything, then revolt or oppose. Without knowing real legal scenario or injustice its totally flawless to protest. The burning side of revolt will only create deep inter-religious riots of misconception and inhuman nature. Lets not slaughter the democratic form of our nation. There is always a way to put our way for justice against injust or any decision of government.

After all there is freedom of speech and expression granted by our constitution to every person. Lets not as government or citizen misuse any rights.

Ultimately WE THE PEOPLE OF INDIA are sufferersâ¦