CBI Files Case Against Ex-Indian Army Officers , Accuses Them Of Corruption In An 18 Year Old Case 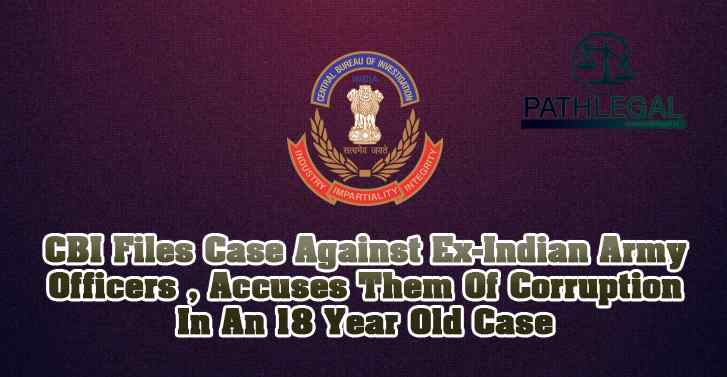 The Central Bureau of Investigation (CBI) has filed a case against retired senior Indian Army officers on the basis of a complaint filed by the Ministry of Science and Technology.

They are accused of manipulating mark sheets and thus forging results of internal promotions within the Ministry.Â The ministry had filed a complaint on August 23, 2018, and the CBI initiated a Preliminary Enquiry two months later in October 2018.Â

The preliminary enquiry filed by CBI on the complaint given by the ministry stated that the vigilance department of science and technology received complaints from employees of Survey of India. "The complaint received by the ministry stated that there was malpractice in the compilation of marks in answer sheets in connection with the Limited Departmental Competitive Exam (LDCE)Â  for group D to C held during 2002 in Survey of India as a result of which candidates who passed were made to fail and vice-versa, which led to the selection of 44 wrong candidates," said a senior CBI official.Â

"It was mentioned that responsibility to set all papers vested with the chairman, while evaluation of the answer sheets was to be done only by the chairman or board members," CBI said in its FIR.

During the investigation, the probe agency found that the examination was conducted at ten centres across the country and answer sheets were evaluated by board members in Hyderabad. " Post evaluation, marks were compiled by the board after which employees were promoted from Group D to Group C," said a CBI official who is part of the probe.Â

CBI then scrutinised all documents and found that of the 74 selected candidates, 44 candidates were wrongly selected on "basis of manipulated mark sheets wrongly prepared by examination board".Â

In its FIR, CBI further mentioned that during the investigation it was revealed that while preparing the mark sheets, examination board manipulated the compilation of marks by "altering the same without noting down the actual marks secured by the candidates". The compilation of marks had been done in the handwriting of the then director of the examination board of STI MV Bhat and other members of the board.Â

CBI's initial probe also showed that other senior officials of examination board including the then brigadier MV Prasad (who held the post of chairman) manipulated the mark sheets so that failed candidates may qualify.