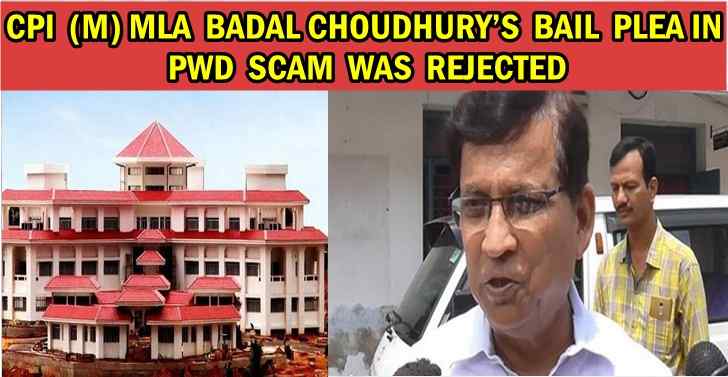 The Â High Court ofÂ  TripuraHONâBLE MR. JUSTICE ARINDAM LODH was delivered the judgment.Â  The court refused to grant bail to CPI (M) MLA Badal Choudhury, one of the prime suspects in the PWD Scam case.Sri Badal Choudhury, is an ex-minister and presently, a Member of the Legislative Assembly. Mr.Choudhury has been arrested in connection with West Agartala PS Case under Section 409, 418, 420, 201, 120B of the Indian Penal Code and Section 13 of the Prevention of Corruption Act, 1988. This application under Section 439 Crpc has been filed by Smt. Namita Gope, wife of the accused person, for releasing him on bail. From the FIRrevealed that there are two other accused persons, namely, Sri Yashpal Singh, IAS, former Chief Secretary and Principal Secretary, Public Works Department under the Government of Tripura and Sri Sunil Bhowmik, former Chief Engineer, Public Works Department under the Government of Tripura.

While adjudicating upon the bail plea filed by Choudhury's wife, the single judge bench of Justice Arindam Lodh said, I am not inclined to grant bail in favor of the accused person. In my opinion, a thorough investigation is necessary to unearth the truth and to lift the veil behind the mirror. Now, it is a preliminary stage of investigation and materially, in all literal meaning, substantial investigation in consonance with different phases of investigation prescribed under the Code of Criminal Procedure, are yet to be commenced.
Â

In Smti. Namita Gope Versus The State of TripuraÂ  defense counsel referred with the caseKeshavanand Bharati vs. State of Keralaper Honâble M.H. Beg, J. drew distinction between âpolitical sovereigntyâ and âlegal sovereigntyâ and held that legally, the British Parliament transferred the whole of its legal sovereignty over the people and territories of this country in British India to the Constituent Assembly which spoke in the name of the people of India. It is held that it is the constitution which is âlegal sovereignâ although the ultimate political sovereignty may and does reside in the âpeopleâ. In the said judgment, Honâble Shelat and Grover, JJ. also held as such that Constitutional structure can be illustrated but not cataloged as a republican and democratic form of the Government and sovereignty of the country. Sovereignty lies in the people and people send their representatives to the Parliament. As held in Keshavananda Bharti (supra), the âlegal sovereigntyâ lies in the Constitution and under the Constitution the Parliament and the State has been given the power to make laws in their respective fields curved out in List-I, List-II and List-III under Articles 245 and 246 of the Constitution. Read moreÂ legal judgmentÂ in Indiaâ¦.