Can Cops Be Fined For Riding Bikes Without Helmet? 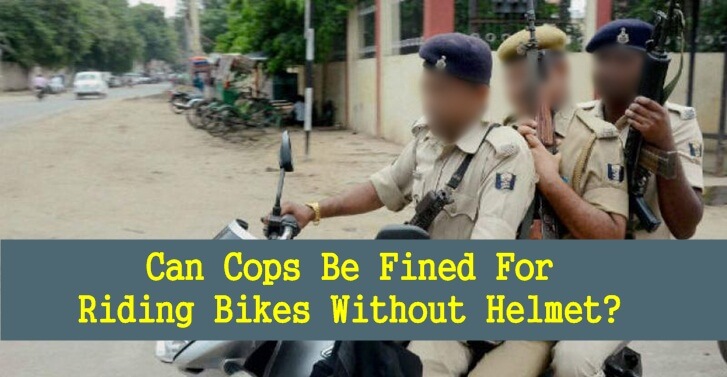 Law is equal to everyone even though if he is a guardian or not. Any law applicable to other citizens of country is also applicable to police too. In fact, they must be an example to the public. Every citizen has the right to report against those people who violates such crimes. Recently Kolkata Police has intended to give penalties for cops who ride bikes without wearing helmets and valid papers. The police commissioner of Karnataka Anju Sharma had strictly watched on the rising complaints against policeman those who violate the law. It is a fact that the guards of law itself are violating the law which will be a serious crime against the society.

On June 25, a traffic policeman named Saradendu SanyalÂ had intercepted his colleague for driving bike without wearing helmet.Â The policeman who was on duty wants to spare his colleague but he does not want that,so he payed the penalties for violating the traffic rule. The incident had been noted by top cops in the police department. The commissioner of police appreciated the policeman and told that he is an example for the entire police department. A supreme Officer had stated that âThere have been several cases. Penalties were charged based on the gravity of the offence. The commissioner has already stressed at the onset of the drive against two-Â wheelers that even if policemen were caught flouting rules,Â they will be prosecuted.Â He even said it is morally incumbent on policemen to adhere to the rules first,Â A police officer in uniform driving a two-wheelerÂ without a helmet or valid papers frustrates the coordinated efforts,Â which are being carried out to pre-empt theÂ violations.â WHO IS MORE POWERFUL LAWYERS OR POLICE OFFICERS? CAN AN ACCUSED PERSON HAVE A PASSPORT? 
The Section 129 in The Motor Vehicles Act, 1988 states about rules on Wearing of protective headgear.âEvery person driving or riding (otherwise than in a side car, on a motor cycle of any class or des c r i p tion) shall, while in a public place, wear 1[protective headgear conforming to the standards of Bureau of Indian Standards]: Provided that the provision of this sections shall not apply to a person who is a Sikh, if he is, while driving or riding on the motor cycle, in a public place, wearing a turban: Provided further that the State Government may, by such rules, provide for such exceptions as it may think fit. Explanation.ââProtective headgearâ means a helmet which,â

(a)Â by virtue of its shape, material and construction, could reasonably be expected to afford to the person driving or riding on a motor cycle a degree of protection from injury in the event of an accident; and

(b)Â is securely fastened to the head of the wearer by means of straps or other fastenings provided on the headgear.

For other related info you can seek the help of lawyers in India.

Click on the image to read more about COURT: LAWYERS AND COPS SHOULD NOT FIGHT EACH OTHER