Can Fundamental Right Be Amended In Reference To Kesahwanand Bharti Case? 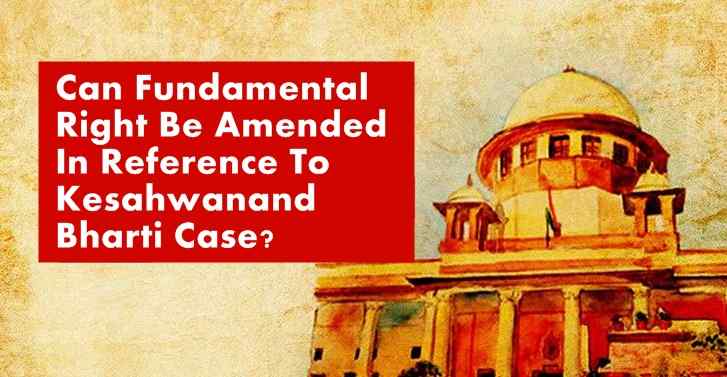 Â Hello Friends, Blog below is related to,Â Can Fundamental Right be amended? Explain the Power of Parliament to amend the Constitution of India, in reference to Keshwanand Bharti case,Â as mentioned in Indian Constitution 1950,Â in the form of Questions with Answers,Â as oftenly asked in Judicial Mains,Â with intention to assist those Judicial Aspirants who are preparing for such examinations, alongwith its video link in the name of:-Â SatyaRajLaws [email protected]Â  Â  -Â https://youtu.be/ogZYjpqAyE4

Qts.)Â Can Fundamental Right be amended? Explain the Power of Parliament to amend the Constitution of India ?

Ans.) Article 368Â â The Constitution may be amended in accordance with the procedure prescribed herein. The Power of Parliament to amend the Constitution isÂ limited or unlimited; this dispute was raised immediately after the commencement of the constitution.

In settling the biggest dispute regarding amendment of the Fundamental Rights, The Supreme Court in 2 cases âÂ Shankri Prasad vs UOI, 1951, SC and Sajjan Singh vs. Rajasthan, SC, 1965,Â held that Parliament has two powers to make law. FirstlyÂ Legislative PowerÂ and secondlyÂ Constitutional Power. Former is mentioned in Article 245 to 255 which are not unlimited while in Constitutional matter it can amend any Article of the Constitution including Fundamental Right. It is also held that Constitutional amendment U/A 13(2) isÂ notÂ a Law.

InÂ I. C. Golak Nath vs. Punjab, 1965, SC, J. Subba Rao (comprises of 11 Judges bench) held that Fundamental Rights are unamendable because constitutional amendment U/A 13(2)Â is a LawÂ and there is no difference between Constitutional and Legislative Powers as Article 368 mention only the procedure of amendment and not the power of the Parliament to amend any constitutional provision. Apex Court in this case led down theÂ Doctrine of Prospective over ruling.

In order to remove above difficulties, Parliament enacted 24thÂ Amendment Act 1971 and added a clause 3 under article 368 and clause 4 under article 13 as well as made clear that, Parliament has âPowerÂ to make constitutional amendmentâ of any provision of the Constitution by the procedure thereof without violating Art 13(2), as it is not a Law.

Basic Structure:-Â (meant the objectives specified in the preamble are the soul of the Constitution which cannot be amended in exercise of power u/a 368).Â Â Justice SikriÂ in Kashwananda Bharti case includes the followings as the Basic structure:-a) Supremacy of the Constitution, b) Republican, Democratic and Parliamentary Form of Government, c) Sovereignty, Unity and Integrity of the Country, d) Separation of Powers between the Legislature, the Executive and Judiciary, e) Maintain Dignity of the Citizen as given in Part III (FR) and IV (DPSP) of the Constitution, f) Rule of Law, Federalism, Judicial Review and equal Justice.

Minerva Mills Vs. Union of India 1980 S.C. (5 Judges Bench) â Article 368(4 & 5) (+ 42ndÂ Amend. 1976) are unconstitutional as it gives a supreme power of amendment to the Parliament, which could destroy the basic structure of the constitution.

Indira Sawhney vs. UOI, 2000, SCÂ â Held that, âLaw of Equalityâ is the basic structure of the Constitution and it cannot be removed or repealed.

R.A.Kohelho vs. Tamil Nadu State, 2007, SCÂ â Held that, Act or Laws which are included in the IXthÂ Schedule after 24thÂ April 1973, are subject to judicial review, if they are inconsistent to Fundamental Rights or Constitutional Rights.

West Bengal vs.Â Â W.B. Protection of Democratic Rights, 2010 S.C.Â â Fundamental Rights is Natural Rights and these cannot be taken away or abridges by any amendment of the constitution u/a 368.

**Procedure and Types of Amendment of Constitutional Provisions**

Art.368 âÂ Power of Parliament (+24thÂ Amend. 1971) to Amend the Constitution and procedure thereof -Â (1) Parliament may in exercise of its constituent power amend by way ofÂ addition, variation or repealÂ any provisions of this Constitution in accordance with the procedure laid down in this article

(2) â An amendment of this constitution may be initiated only by the introduction of a Bill for the purpose in either House of Parliament and when that Bill is passed from each House of the Parliament by a majority of not less than 2/3rdÂ of the members of that House present and voting, it shall be presented to the President who shall give his assent to the Bill and thereupon the Constitution shall stand amended in accordance with the terms of the Bill.Â

(3) â Nothing in Art. 13 shall apply to any amendment made in this article.Â

(4) â No amendment after 42ndÂ amendment 1976 in part III of this Constitution shall be challenged in any Court of Law.

Types -Â Technically for amendment of constitution sometimes special majority requires and sometimes it needs simple majority, but practically there are 3 types of amendment â

2)Â Special MajorityÂ (2/3 of the total members of the house)Â and RatificationÂ (ofÂ Â½Â of total number of States (Art.368 (2))Â -Â i)Â Article 54 and 55 â Election of President of India,Â ii)Â Article 73 and 162 â extent of executive power of Union and States,Â Â Â iii)Â Article 124 to 147; Article 214 to 231; Article 241(Union Territories) Higher Judiciary,Â iv)Â Article 245 to 255 âDistribution of Legislative powers between the Centre and the States i.e. Federal Structure,Â v)Â 4thÂ Schedule -The representation of States in the Parliament,Â vi)Â 7thÂ Scheduled â any of its lists i.e. Union List, State List and Concurrent List,Â vii)Â Article 368 itself.

3)Â Special MajorityÂ (2/3 of the members present and voting)Â â all other Articleâs Amendment is done by this procedure.