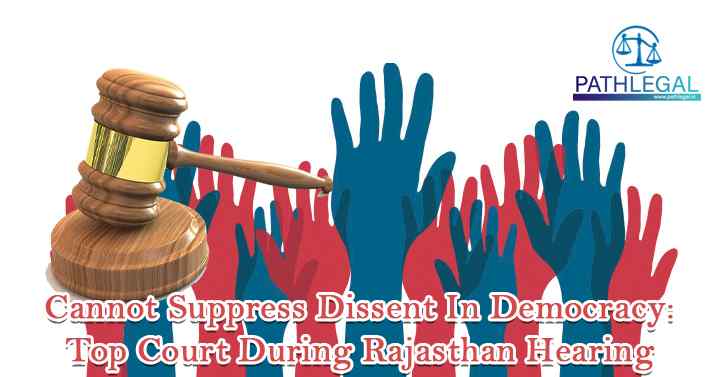 A Supreme Court judge today while hearing petitions on the crisis in the Rajasthan government mentioned a passing reference to the idea of dissent. A three-judge bench of the Supreme Court comprising Justices AK Mishra, BR Gavai and Krishna Murari today heard rival petitions filed by the Sachin Pilot camp and the Ashok Gehlot's Congress government.

Kapil Sibal, who represented Rajasthan Speaker CP Joshi, and Justice Mishra went into a discussion on the matter soon after the hearing opened.

Mr Sibal first read out details of disqualification noticeÂ sent by the Speaker to the Sachin Pilot camp.

During the proceedings, Justice Mishra replied without directly referring to the Rajasthan case: "We are not saying about the Rajasthan case, but assume a leader has lost the faith of persons. While remaining in party they cannot be disqualified. Then this will become a tool and no one can raise their voice. The voice of dissent in a democracy cannot be suppressed like this."

He was responding to the arguments of Mr Sibal defending his right to serve notices questioning rebels why they skipped party meetings. "The High Court cannot give any protective order at this stage to the other camp. No court can intervene when the Speaker is deciding the case," Mr Sibal said.

Justice Mishra asked: "After all they have been elected by the people. Can they not express their dissent?" Mr Sibal replied that they would need to explain. "It is the Speaker which will decide, not any court," he said.

Speaker CP Joshi had served notices to 19 rebel MLAs, including Sachin Pilot, after they skipped two meetings of Congress MLAs called by Chief Minister Ashok Gehlot last week. The rebels have argued in court that they do not intend to quit the party; they only want a change in the leadership. Mr Sibal said their act of not joining the meetings amounted to giving up their membership.