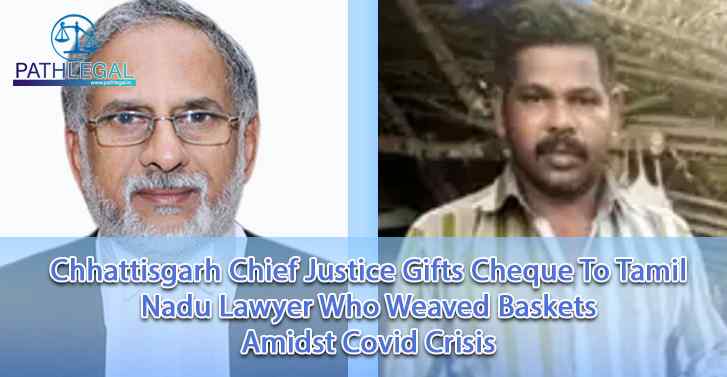 Chhattisgarh high courtÂ chief justice PR Ramachandra Menon has sent a gift cheque of Rs 10,000 to a first generation graduate lawyer hailing from Tamil NaduÂ after he was forced to take up his traditional job of making bamboo basketsÂ amidst the ongoing coronavirus crisis.

âThis is not a donation or contribution out of any sympathy, but a 'gift' you deserve in recognition and appreciation of your concept/commitment to the 'dignity of labour'. It is also to alert the Lawyer's fraternity at large, to be 'positive', as every sunset will be followed by a sunrise,â he added.

Uthamakumaran, a 34-year-old advocate hailing from tribal malai kuruvar community was practising at Pattukottai court in Thanjavur. With the nationwide Covid-19 lockdown, which has hit hard livelihoods of many including young and struggling lawyers, Uthamakumaran was unable to earn anything during the lockdown period due to the courts being shut.

The lockdown troubles have made it hard for him to feed his wife and a seven-year-old kid with the savings of Rs 10,000. Uthamakumaran had told TOI last month that he was ready to do any work but he only knows the ancestral work of weaving baskets from wild date palm fronds. These baskets are used to store things and filter water from cooked rice at functions.

Uthamakumaran, who was earning about Rs 25,000 as an advocate, said that he can earn up to Rs 1,500 a week by selling the baskets, which is not enough to live on.