Circumstances Where A Private Person May Arrest A Person Without Warrant, As Given In Cr.PC 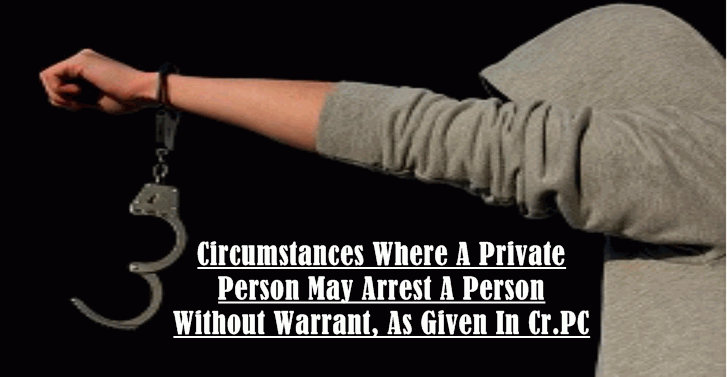 Hello Friends, Blog below is related to, The circumstances whereÂ  a Private person may arrest a person without warrant, as given in Criminal Procedure Code 1973 ,Â the form of Questions with Answers,Â as oftenly asked in Judicial Mains,Â with intention to assist those Judicial Aspirants who are preparing for such examinations, alongwith its video link in the name of -Â  Â  Â SatyaRajLaws [email protected]

Qts.) Briefly describe the circumstances where under a Police officer, a Private person and a Magistrate may arrest a person without warrant.

Ans.) It is a fundamental principle of criminal law that any police officer may arrest any accused person with warrant of arrest which is issued by a competent Magistrate or a Court. But there are certain provisions in the CrPC where the police may arrest any person without warrant. As;

Sec. 41 A (Saukin vs. UP) â Notice of appearance before police officer - The police officer may, where arrest of person is not required, issue a notice to the alleged accused of cognizable offence either on complaint or on credible information or on reasonable suspicion, so as to make his appearance before him or such other places as may be specified in the notice.

Sec. 41 B â Procedure of arrest and duties of officer making arrest â i) bear an accurate, visible and clear identification of his name, ii) prepare a memorandum of arrest, attested by at least one witness as being a member of a family of arrested person and counter signed by the person arrested, iii) inform the relative / friend of an arrested person, about his arrest.Â  Â Â Â Â Â Â Â Â

Section 43 â Arrest by private person â Any private person may arrest or caused to be arrested, any person who in his presence commits, a) non-bailable offence, or b) cognizable offence, or c) is a proclaimed offender, and, without unnecessary delay, shall make over or cause to be made over any person so arrested to a police officer, or in his absence to the nearest police station.

Section 44 â Arrest by Magistrateâ(1) When any offence, cognizable or non-cognizable, is committed in the presence of a Magistrate, whether executive or judicial, within his local jurisdiction, he may himself arrest or order any person to arrest the offender, and may thereupon, commit the offender to custody or released him on bail.

*Directorate of Enforcement v/s Deepak Mahajan, 1994, SC â It was observed that, this Code gives power of arrest not only to a Police Officer and a Magistrate but also under certain circumstances or given situations to private persons. Further, when an accused person appears before a Magistrate or surrenders voluntarily, the Magistrate is empowered to take that accused person in custody and deal with him according to law.