Complete Information About Contempt of Court 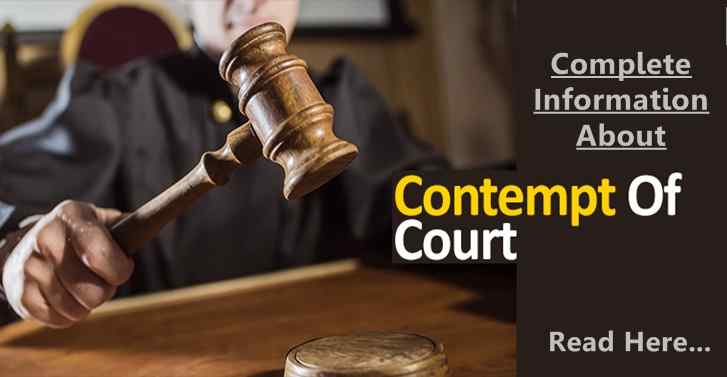 Contempt of court is any conduct that disrespect or disregard for interfering with or prejudice parties or with their witnesses during the litigation before the respective authority and administration of law. The Contempt of Courts Act, 1971 governs the contempt law in India. Then the judges of the court have the authority to pass sanctions such as sending the contemnor(the person who committed contempt of court) to jail for a specific amount of time or by imposing fines on those guilty of contempt of court.

The act empowers the Supreme Court and High Court to punish acts of contempt. The Supreme Court and High Courts being courts of record have the constitutional validity to punish for contempt of court and theÂ Contempt of Courts Act, 1971, according to the jurisdiction. Contempt of court can be understood as an offence of defying the court authority by disobeying the instructions laid by the court. The Act defines civil contempt under section 2(a) as contempt of court means civil contempt or criminal contempt. The two types of contempt are different in character and very difficult to differentiate.

Section 2(b) of the 1971 ActÂ not only encompasses willful disobedience to any judgment, decree, direction, order etc. of a court, it also takes in its fold a willful breach of an undertaking given to a court of law. The civil contempt is wrong of private nature. It injures the interests of the party, entitled to get benefit from the disobeyed order, whereas criminal contempt is an offence against the society where the contemnor undermines the authority of the court by his words or actions.

Section 2 (c)Â defines the âcriminal contempt' as the publication (whether by words, spoken or written, or by signs, or by visible representation, or otherwise) of any matter or the doing of any other act, whatsoever which;

(ii) prejudices, or interferes or tends to interfere with, the due course of any judicial proceeding; or

(iii) interferes or tends to interfere with, or obstructs or tends to obstruct, the administration of justice in any other manner.

Also,Â Article 129 and 215Â of the Constitution of India empowers the court to take action against the contempt.Â Article 129Â empowers the Supreme Court, whereasÂ Article 215Â empowers High Courts. Whereas,Â Section 10Â of The Contempt of Courts Act, 1971 has given them special powers to the respective High Courts to punish contempt of subordinate courts.

Article 129, of the Constitution of India, states that the Supreme Court shall be a court of record and shall have all the powers of such a court including the power to punish for contempt of itself.

Article 215, of the Constitution of India, states that every High Court shall be a court of record and shall have all the powers of such a court including the power to punish for contempt of itself.

What is the statutory basis for Contempt of court?

India witnessed Pre-independence laws of contempt in India. Not only the early High Courts, but the courts of some princelystates also had such laws. After the constitution was adopted, contempt of court was made one of the restrictions on freedom of expression and speech. Moreover, Article 129 of the constitution conferred on the Supreme Court the power to punish contempt of itself.Â Article 215 conferred a corresponding power on the High Courts. The Contempt of Courts Act, 1971, gives statutory backing to the idea.

What are the kinds of Contempt of Court?

According to Indian Law, contempt is classified it as civil and criminal. Talking about civil contempt,it is fairly simple. It is said to be committed when someone willfully breaches an undertaking given to court or someone willfully disobeys a court order. However, criminal contempt is more complex. It consists of mainly three forms:

Raising allegations against the individual judges or judiciary, which contributes to motives to judgments and judicial functioning and any scurrilous attack on the conduct of judges are normally considered matters that scandalize the judiciary. The reason for the provision is that courts must be protected from those attacks that lower its authority, make the public lose faith in its public impartiality and defame its public image.

Essentials of Contempt of court

To prove an offence in the court, it is very necessary to fulfil the essentials of it first. Every offence in India has certain exceptions that haveto be fulfilled for making the person liable for doing the act. To understand the requirement of fulfilling the essentials, let us go through with an example, if a person named Surya has to prove that the other person named Samiksha is the guilt of committing an act which is unlawful and an offence in the court of law. Then the liability to prove Samkisha guilty relies on Surya, which includes fulfilling the essential required to commit that act or not. Similarly, the contempt of court also has certain essentials that are as follows:

What is not contempt of court?

Accurate and fair reporting of judicial proceedings will not amount to contempt of court. With these, any fair criticism on the merits of a judicial order after a case is heard and disposed of.

Truth: Defense against a contempt charge?

For the past few years, the truth was the only one that was considered as a defence against the charge of contempt. There was always an impression that the judiciary tended to hide any misconduct among its individual members in the name of protecting and safeguarding the image of the institution. The Act was amended in 2006 to introduce truth as a valid defence if it was in the public interest and was invoked in aÂ bona fideÂ manner.

The procedure of the court proceedings

The procedures laid as per the Contempt of Court Act, 1971 has to be followed, as mentioned in Article 129 and 215 of the Constitution of India. An individual can recourse to the following options against the contempt.

1. He may place the information before the court and request the court to take action.

2. He may put the information before the Attorney General and request him to take appropriate action.

The contemnor alleged is entitled to get a notice about the same an opportunity of being heard, before considering him guilty of contempt and passing an order.Â

Punishment for contempt of court

Remedies against an order of Punishment

The Contempt of Court Act, 1971, recently witnessed an amendment in the year 2006, through, which section 13 of the act came into force. The new act is therefore termed as Contempt of Court Amendment Act, 2006. Section 13 states that contempt of court cannot be punished under certain circumstances or certain cases.

Clause (b) of Section 13 of this Act states thatthe court has the authority to give defence on the justification of truth in cases where it finds that the act done in the public interest and the request for invoking that defence is bona fide.Â

In this case, the judge stated that procedural factor of Contempt of court may still be regulated by the Parliament so that it could be applied in the Supreme Court and as well as the High Court. This further means that Section 12(1) of the Contempt of court Act, 1971, which states a maximum fine of Rs. 5000 and imprisonment for a term of six months shall be applicable in this case.

Sudhakar Prasad vs. Govt. of A.P. and Ors.

This case is similar to the above-mentioned case study. In this case, also once again, the Supreme Court declared that the ultimate powers to punish for contempt are inherent and in-built in nature, and the provision of the constitution only recognized the said pre-existing situation.

However, it is important to note that the provision of contempt of court cannot be used to limit the exercise of jurisdiction given in Article 129 and Article 215 of the constitution.

In this case, it was held that the punishment that is given for contempt in the Contempt of Court Act, 1971 shall only be applicable to the High Court but for Supreme Court, it acts as a guide.Â As this judgment was not accompanied by rationality, this was a difficult situation as the Supreme Court has been given great powers that the drafters of the Indian Constitution has also not given.

The current job identifying with ex facie contempt of lower courts is unacceptable and deluding in India. It creates the impression that clearly, challenges in such manner are the after the result of the cover of contempt powers under the Indian Penal Code, Contempt of courts Act and hatred forces of the Supreme Court and High Court under the Indian constitution. The situation has risen as more convoluted by a method of the conflicting translations finished the Supreme Court and High Court in regards to different arrangements under the Indian Penal Code dealing with interference with the administration of justice and exclusion clause contained in the Contempt of Courts Act. Not just the higher court ought to be enabled to manage hatred, yet additionally, the lower court ought to be given this force. Contempt of court whenever seen from the point of view of the appointed authorities, higher legal authorities appear to be acceptable yet in the event that it goes to the viewpoint of common people it turns towards its awful impact.

The author of this blog/Article isÂ Kishan Dutt Kalaskar, a Retired Judge and practising advocate Â having an experience of 35+ years in handling different legal matters. He has prepared and got published Head Notes for more than 10,000 Judgments ofÂ  the Supreme Court and High Courts in different Law Journals.Â  From his experience he wants to share this beneficial information for the individuals having any issues with respect toÂ their related mattersÂ .