Contempt Plea Against Rajdeep Sardesai For His Tweets Against SC 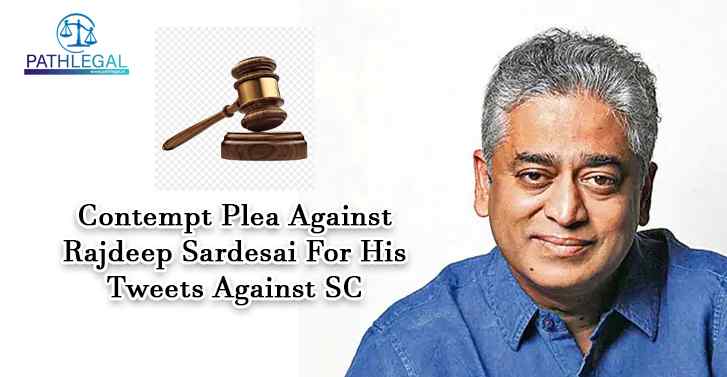 A petition has been filed in the Supreme Court seeking initiation of criminal contempt proceedings against India Today Consulting Editor and former Editors Guild of India chief Rajdeep Sardesai for allegedly scandalising the judiciary by his tweets against the court and its judges.

Petitioner Astha Khurana has also sent an application to Attorney General KK Venugopal seeking his consent for the initiation of contempt proceedings against Sardesai for allegedly disrespecting the Supreme Court.

Venugopal had last month urged the top court not to punish activist-lawyer Prashant Bhushan. He had also refused sanction to initiate contempt against actor Swara Bhaskar over her alleged remarks on the Supreme Courtâs Ayodhya verdict, saying her comments did not amount to attack on the judiciary.

Astha cited many of Sardeaiâs tweets. In one such tweet posted on August 31 on Prashant Bhushan contempt case, he allegedly said: âBreaking: Rs 1 token fine imposed by SC onÂ @pbhushan1Â in contempt case.. if he doesnât pay it, then 3 months jail sentence! Clearly, court looking to wriggle out of an embarrassment of its own making.â

Pointing out other comments by the senior journalist with regard to Prashant Bhushan's case, the petitioner contends that he "tried to spread feeling of no confidence on the Hon'ble Court amongst public and even stated the apology by the Hon'ble Court for its recent judgmentsâ.

In another tweet on August 14, Sardesai allegedly compared the Prashant Bhushan case verdict to habeas corpus petitions of persons detained in Kashmir. In yet another tweet he allegedly cast certain aspersions on Justice Arun Mishra who retired on September 2.Â