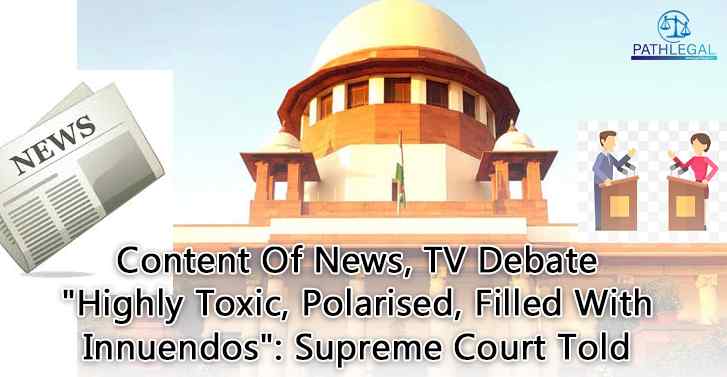 The Supreme Court was on Tuesday told by the wife of a Congress spokesperson and a widow of the party leader that the content of "news coverage" and "TV debate" in recent times has been "highly toxic, polarised and filled with innuendos".

In a fresh plea, they sought top court's approval to place on records the study report on "Media Trials" done by "Rate the Debate", a research platform, on the content of news discussion and debates undertaken by two renowned TV journalists.

They said certain TV anchors have consistently created a false narrative through "Media Trial" influencing the public opinion towards their "covert objective".

The plea said media trial is also a part of hate speech.

Sangeeta Tyagi, whose husband Rajiv Tyagi died recently of heart attack after participating in a TV debate, and Kota Neelima - had moved the Supreme Court for intervention in the Sudarshan TV case and had sought that certain news anchors and "peddlers of hate speech" should not be given the benefit of freedom of speech.

The fresh plea, filed through lawyer Sunil Fernandes, which is based on detailed analysis of prime time programmes of two English news channels, alleged that most of the shows were on "singular topic that is Sushant Singh Rajput Death Case".

"The statistic does not reveal the complete picture. Not only an overwhelming and inordinate amount of time is devoted to a single topic, the manner, tone, tenor and content of the 'News Coverage' and 'TV Debate' was highly toxic, polarised and filled with innuendos, salacious gossips, wild allegations and character assassinations," the plea said.

"Media Trials is another facet of Hate Speech. Media Trials can take place for a variety of reasons, for instance, it can be in order to grab a higher share of Television Rating Points (TRPs) or it can be something more sinister whereby certain private television channels act as proxy propaganda machines for the Central Government.

"These channels have a specific methodology to report the Rajput case", it said adding, "Firstly, they deliberately create a hypothesis or a false construct/premise, for example, Sushant Singh Rajput was murdered and did not commit suicide."

"They will then insinuate that a top politician or a powerful personality is behind the 'cover-up', it said, adding that these programmes would "convince the viewer of the hypothesis even before the prosecuting agency has completed its investigation and filed its charge-sheet".

The Sudarshan TV case relates to seeking ban on the telecast of "Bindas Bol" programme which alleges infiltration of Muslims into the country's bureaucracy and the top court has already imposed the pre-telecast ban on episodes of "UPSC Jihad" show on the main plea that raised grievances against it on grounds including hate speech.

Now the Centre has issued a show-cause notice to the channel based on the recommendation of an inter-ministerial group.

Ms Tyagi and Ms Neelima, the author-researcher wife of Pawan Khera, had earlier referred to the prime time TV shows of four prominent anchors in their intervention plea alleging that their programmes are mostly communal in nature and favour the ruling party.

Seeking urgent hearing on their plea, they had compared the "situation of the Electronic Media" in the country with "Nazi Germany".