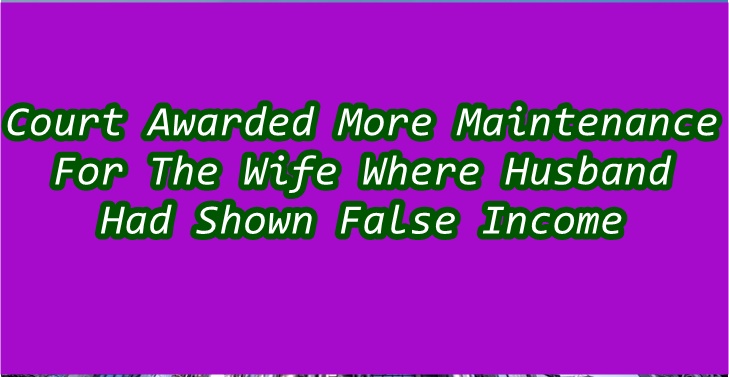 A bench of Justice Sanjeev Sachdeva has passed the order in the case titled asÂ Manju Sharma vs VipinÂ on 01.07.2019.

In a domestic violence case, by the impugned order dated 06.06.2013, the trial court heldÂ that respondent had not clearly disclosed his income and the assertionÂ that he was earning only Rs. 12,000/- per month was unbelievable and
accordingly prima facie assessed his income at Rs. 30,000/- andÂ awarded Rs. 10,000/- to the petitioner and her daughter.Â The appellate court by the impugned order found no infirmityÂ in the view taken by the trial court and dismissed the appeal filed byÂ the petitioner seeking enhancement.

When the matter came before the High Court, it observed âClearly, the appellate court has erred in placing the burden ofÂ proof on the petitioner and has erred in holding that she has not placedÂ the details of the contract with regard to the RO Water business of theÂ respondent. The listings which are placed on various websites by the respondent prima facie show a turn over of Rs. 50 lakhs to Rs. OneÂ Crore per annum. Further, the website listings placed on record primaÂ facie show that the respondent is also engaged in the business of saleÂ and purchase of second- hand cars. Even the father of the respondentÂ had stated that he was engaged in the jewellery business along with theÂ respondent though the business is stated to be closed today. At theÂ stage of assessment of interim maintenance, the court has to only form aÂ prima facie opinionâ.

Then the High Court enhanced the maintenance by saying âIn my view, the trial court, as well as the appellate court, hadÂ erred in assessing the income of the respondent and fixing interimÂ maintenance on a very lower scale. Keeping in mind the requirementÂ of the petitioner and her daughter, the interim maintenance needs to be enhanced. In view of the material placed by the petitioner on recordÂ and the expenditure required to be incurred, I am of the view that theÂ interim maintenance should be enhanced to Rs. 30,000/- per monthâ.