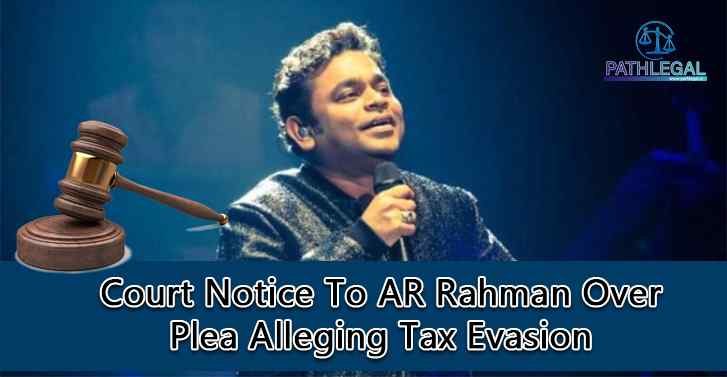 The Madras High Court on Friday issued notice to music composer A R Rahman on a petition filed by the Income Tax department alleging that he used a foundation in which he is the managing trustee as a conduit to evade tax and routed Rs three crore plus income to it.

The Income Tax Department moved the High Court challenging the ruling of the Income Tax Appellate Tribunal in Chennai that set aside the order of the Principal Commissioner of Income Tax in Chennai.

A division bench of justices TS Sivagnanam and V Bhavani Subbaroyan recorded the submissions made by the IT department and issued notice to the music composer.

According to senior standing counsel for the Income Tax department T R Senthil Kumar, in the assessment year 2011-12, Mr Rahman received income to the tune of Rs 3.47 crore in connection with an agreement made with the UK-based Libra Mobiles.

As per the contract, Mr Rahman instructed the company to pay his remuneration directly to the foundation managed by him, the department said.

"The taxable income must be received by Mr Rahman and after due deduction of tax, it can be transferred to the trust. But the same cannot be routed through the trust as income to the charitable trust is exempted under the Income Tax Act," the counsel said.

According to the petition filed by the Income Tax department, Mr Rahman after receiving the IT notice had moved the Income Tax Appellate Tribunal in Chennai and the tribunal in September 2019 had held that the government of India had

accorded "post facto approval" with respect to this contribution.

The tribunal ruled in favour of Rahman finding that the amount was not taxable.

The petition said the order of the appellate tribunal is "erroneous in law" and opposed to facts and circumstances of the case.

Mr Rahman had received Rs 3,47,77,200 from Libra Mobile during 2010-11 in his individual capacity as an artiste which must have been considered for taxation and this was not considered by the Assessing Officer in the reassessment order.

The receipts by the trust are professional fees paid to the assessee for the services rendered by him.

However, the assessee has not admitted these professional receipts in his return of income for the assessment year 2011-12.

Instead of receiving the consideration as professional charges in his individual capacity, the assessee has got these payments diverted to A R Rahman Foundation which is registered as a tax-exempt entity under the Income Tax Act, the plea said.

The amount that must have been received by Mr Rahman as professional fee has been passed off as "donation" to the foundation.

The tribunal failed to consider that the assessee who is also the managing trustee of A R Rahman Foundation has used it as a "conduit" for accounting his own untaxed income, the plea said.

The Assessing Officer had not made any attempt to examine the various clauses of agreement nor tried to make enquiry to ascertain facts.

Also, the AO did not gather any material during the course of reassessment proceedings to come to the very same conclusion arrived at during the original assessment, the plea added.

In a statement to PTI, Mr Rahman's management quoted the tribunal's ruling in the musician's favour.

"The receipt of funds in the current matter has already been offered to tax in the hands of the AR Rahman Foundation which was appreciated by the Honorable Income Tax Appellate Tribunal, Chennai Bench while it adjudicated the matter in favour of Mr AR Rahman. We will continue to offer our full support and cooperation. May justice prevail," the statement read.

Mr Rahman's management said the foundation was established in 2006 with a vision to empower the underserved sections of society through education, unity, humanity and leadership.

"In the last 14 years, we have positively impacted the lives of students, retired musicians and those affected by Chennai floods and more recently, the COVID-19 pandemic," the statement read.