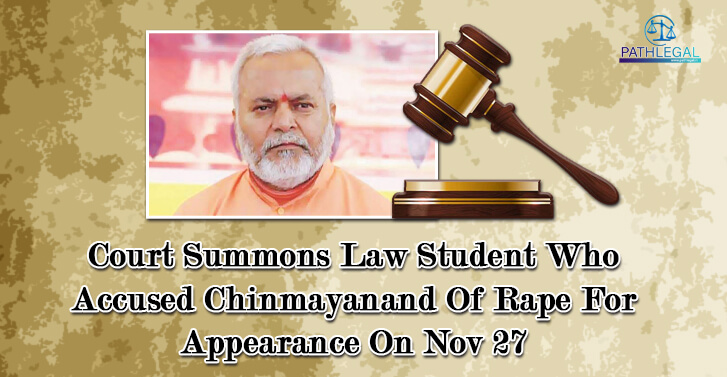 The special MP-MLA court on Thursday ordered the law student who had accused former Union minister Swami Chinmayanand of sexual harassment, to appear on November 27 before it to record her statements.

âThe court has ordered the law student to appear before it to record her statements as to why she has disowned her allegations of sexual harassment against Chinmayanand,â said Abhay Tripathi, prosecution lawyer representing the state.

Meanwhile, accountant Gaurav Gupta of the Swami Shukdevanand Post-Graduate College, Shahjahanpur, where the law student studied, appeared before the court to record his statement. He was the sixth prosecution witness to appear before the court of Pawan Kumar Rai, special judge.

The former minister is president of the managing committee of the college. Gupta testified that the law student was also working in the college library while studying law and was drawing a salary.

The prosecution has listed 33 witnesses to appear before the court. Thereafter, the defence will get an opportunity to produce their witnesses.

The law student had disowned her accusations before the court, through her lawyer, on October 13 last and denied that she had leveled any allegation of sexual harassment against Chinmayanand.

A case has been filed against her under Section 340 of the Cr PC for lying in court. This is a miscellaneous case in addition to the ongoing State Vs Chinmayanand case.

âIn all her FIRs, even the one lodged in New Delhi, the law student had leveled allegations of sexual harassment against the former minister. Now she has disowned these allegations. This is a clear case of perjury,â Tripathi pointed out.

The sexual harassment case came to light in August last year when the woman went missing from Shahjahanpur in Uttar Pradesh. Later, she released videos alleging rape and sexual harassment by the former minister.

The state government formed a special investigation team (SIT) to investigate the matter and SIT lodged an FIR against the former minister under Section 376-C of the IPC. It also implicated the law student for extortion.

Chinmayanand and the law student were arrested and sent to jail in September last year. In February this year, the Allahabad high court granted bail to Chinmayanand. The woman also secured bail and is currently out of jail.