Cremation Without Victim Kins Consent Infringement Of Their Rights: HC 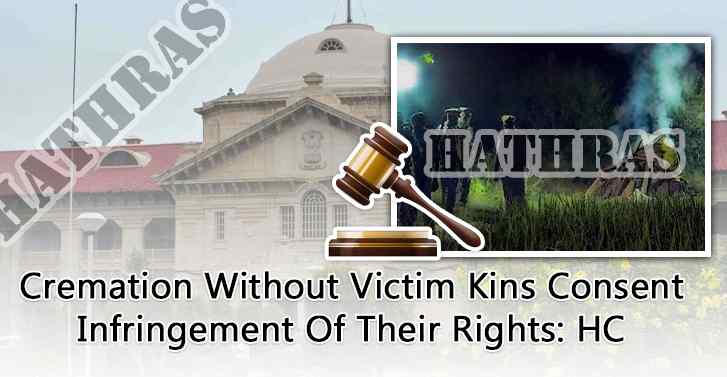 TheÂ HathrasÂ district administration's decision to cremate the alleged gang-rape victim's body without the consent of the family and without following religious rituals was prima facie an infringement of theirÂ human rights, the Lucknow bench of theÂ Allahabad high courtÂ said here on Tuesday. Responsibility should be fixed for this, it added.

Issuing the order, the division bench of Justices Pankaj Mithal and Rajan Roy also directed the UP government to lay down modalities for cremation of dead bodies in Hathras-like situations.

The bench also directed the state government to act against the Hathras district magistrate to maintain fairness of the entire legal and judicial process which is under way, as he has himself admitted that cremation of the victimâs body at night was the collective responsibility of the DM, Aligarh commissioner, Agra ADG, IG Aligarh and SP Hathras.

The court questioned the state taking action against SP alone and not the DM. The HC also directed the state to provide adequate security to the victimâs family and ensure that no harm comes to them.

Besides, considering the sensitiveness of the issue, the bench directed the state officials, political parties and others to avoid making any statement in public on the issue. The court also expected electronic and print media to observe restraint while reporting and debating the matter.

"The inquiry/investigation which is being carried on in the matter either by the SIT or by CBI be kept in full confidentiality and no report or post thereof is leaked out in the public," the bench ordered.

Pulling up ADG (law and order)Â Prashant KumarÂ and Hathras DM Praveen Kumar Laxkar for issuing statements on the basis of the victimâs medical report that no rape was committed, the court asked the ADG whether he was aware of the new definition of rape after 2013, which says that mere absence of semen during forensic examination, though a factor for consideration, does not by itself be conclusive as to whether rape had been committed or not, if there is other admissible evidence. The court cautioned him not to make such statements, more so when he was not an investigation officer.

Keeping in mind the widespread statements being made by officers affecting and influencing the investigation, the bench said, "No officer who is not directly connected with the investigation should make any statement in public regarding commission of the offence alleged or otherwise based on evidence collected as it can lead to unnecessary speculation and confusion amongst the masses, who may not be aware of niceties of law thereby fueling emotions on both sides."

"The investigating agency and the courts are seized of the matter and irresponsible statements on the issue should be avoided by all," the bench said.

About media coverage, the bench said, "Without intending to interfere with the right of freedom of expression, we request the media as also the political parties to air their views in a manner which does not disturb social harmony and/or infringe upon rights of the victim's family and that of the accused."

"No one should indulge in character assassination of the victim just as the accused should not be pronounced guilty before a fair trial. The investigating agency and the courts should be allowed to determine these issues", the bench added.

The court directed the state to hand over compensation as offered earlier to the victimâs family and in case they refuse it, the same be deposited with the DM to be deposited in a nationalised bank.

Fixing November 2 as the next date, the bench directed the ADG (law and order) and a secretary-rank officer as well as then Hathras SP Vikrant Vir to appear before it.

The bench had heard the depositions of the family members of the victim and government officials on Monday after it had summoned them to respond on the issue of cremation of the victim at night.
On the explanation and statement of the DM that he took the decision without any influence or direction from Lucknow, the court said that, as of now, the DM has not been able to provide a satisfactory explanation.

"We do not find any good reason on behalf of the administration as to why they could not hand over the body to the family members for some time, say for even half an hour, to enable them to perform their rituals at home and thereafter to cremate it either in the night or next day," the bench said.

"Admittedly, though the administration may not have categorically refused the family members to see the face of the deceased but the fact remains that it was not shown to any of them in spite of their repeated requests," it said, adding that "the anxiety of the court as of now is on two counts; firstly, whether there was any violation of the fundamental rights of the deceased victim and her family; and secondly, the larger issues involved in the context of such rights which are generally available to all residents of the state and even beyond it so that valuable constitutional rights are not compromised casually and whimsically."

On governance, the court said: "The guiding principle of governance and administration, after Independence, should be to 'serve' and 'protect' people and not to 'rule' and 'control' as was the case prior to Independence. The government should come out with appropriate procedures as guidance for district officials to deal with such situations."