Defence of Insanity in India -Sec 84 of IPC 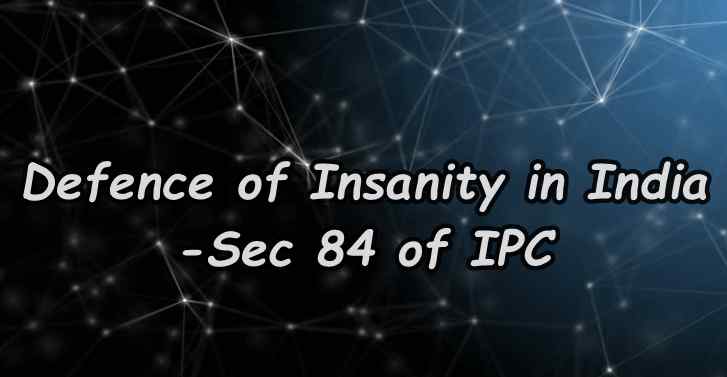 The insanity defence is primarily used in criminal prosecutions. It is based on the assumption that at the time of the crime, the defendant was suffering from severe mental illnessÂ andÂ was incapable of appreciating the nature of the crime and differentiating right from wrong behaviour, hence making them not legally accountable for crime. The insanity defence is a legal concept. This means that just suffering from a mental disorder is not sufficient to prove insanity. The defendant has the burden of proving the defence of insanity by a âpreponderance of the evidenceâ which is similar to a civil case.

It is hard to determine legal insanity, and even harder to successfully provide evidenceÂ in court. This article focuses on the recent Supreme Court decision on insanity defence and standards employed in the Indian court. In India, Section 84 of Indian Penal Code (IPC) deals with the âact of a person of unsound mindâ and discusses the insanity defence.

In 1843, Daniel Mc Naughten, a wood-turner from Glasgow, shot and killed Edward Drummond mistaking him for Sir Robert Peel. Mc Naughten believed that he was persecuted by the Tories, and evidence was brought to show that he had been totally deluded on this subject for some time. His state of mind was apparent from the outset when he had to be coaxed, and finally tricked, into pleading ânot guilty.â After hearing seven medical witnesses testify that he was completely insane, the judge stopped the trial, the jury brought in the special verdict without summing up and without retiring, and Mc Naughten was forcibly committed to the Bethlem Hospital. Immediately thereafter, five propositions were drawn which were called Mc Naughten rules.

This Mc Naughten rule became a legendary precedent for the law concerning the defence of insanity. In India, insanity defence law, Section 84 IPC is solely based on the Mc Naughten rules. Since it is drafted, no changes have been made. However, in 1971, there was an attempt by the Law Commission of India to revisit Section 84 in their 42ndÂ report, but no changes were made.

Section 84 of IPC deals with the âact of a person of unsound mind.â âNothing is an offence which is done by a person who, at the time of doing it, by reason of unsoundness of mind, is incapable of knowing the nature of the act, or that he is doing what is either wrong or contrary to law.â

In simple words, legal insanity means, at the time of the commission of the act, the person should be suffering from mental illness and also have a loss of reasoning power. This issue is clearly depicted in Section 84 IPC as that person incapable of knowing:

Recent Insanity defence case is given below

The Supreme Court in theÂ caseÂ of Hari Singh Gond Vs. State of M.P.:

Section 84 lays down the legal test of responsibility inÂ casesÂ of alleged unsoundness of mind. There is no definition of 'unsoundness of mind' inÂ IPC. The courts have, however, mainly treated this expression as equivalent toÂ insanity. But the term 'insanity' itself has no precise definition. It is a term used to describe varying degrees of mental disorder. So, every person, who is mentally diseased, is not ipso facto exempted from criminal responsibility. A distinction is to be made between legalÂ insanity and medicalÂ insanity. A court is concerned with legalÂ insanity, and not with medicalÂ insanity. The burden of proof rests on an accused to prove hisÂ insanity, which arises by virtue ofÂ Section 105Â of the Evidence Act, 1872 and is not so onerous as that upon the prosecution to prove that the accused committed the act with which he is charged. The burden on the accused is no higher than that resting upon a plaintiff or a defendant in a civil proceeding.

According to Section 105 in The Indian Evidence Act, 1872

105. The burden of proving that the case of accused comes within exceptions.âWhen a person is accused of any offence, the burden of proving the existence of circumstances bringing the case within any of the General Exceptions in the Indian Penal Code, (45 of 1860), or within any special exception or proviso contained in any other part of the same Code, or in any law defining the offence, is upon him, and the Court shall presume the absence of such circumstances. Illustrations

A, accused of murder, alleges that, by reason of unsoundness of mind, he did not know the nature of the act. The burden of proof is on A.

A, accused of murder, alleges, that by a grave and sudden provocation, he was deprived of the power of self-control. The burden of proof is on A.

Plea of self-defence When the prosecution has established its case, it is incumbent upon the accused, under section 105 to establish the case of his private defence by showing probability; Samuthram alias Samudra Rajan v. State of Tamil Nadu, (1997) 2 Crimes 185 (Mad).

The burden of establishing the plea of self-defence is on the accused and the burden stands discharged by showing the preponderance of probabilities in favour of that plea on the basis of material on record; Rizan v. the State of Chhattisgarh, AIR 2003 SC 976.

A lunatic is one who is afflicted by mental disorder only at certain periods and vicissitudes, having intervals of reason. Madness is permanent. Lunacy and madness are spoken of as acquiredÂ insanity, and idiocy as naturalÂ insanity.

To Get More Legal Jobs In India...DOWNLOAD OUR APP

Â Section 84Â embodies the fundamental maxim of criminal law i.e. actus non facit reum nisi mens sit rea (an act does not constitute guilt unless done with a guilty intention). In order to constitute an offence, the intent and act must concur; but in theÂ caseÂ ofÂ insaneÂ persons, no culpability is fastened on them as they have no free will.

Madness is permanent. Lunacy and madness are spoken of as acquiredÂ insanity and idiocy as naturalÂ insanity.

Section 84Â embodies the fundamental maxim of criminal law i.e. actus non reum facit nisi mens sit rea (an act does not constitute guilt unless done with a guilty intention). In order to constitute an offence, the intent and act must concur; but in theÂ caseÂ ofÂ insaneÂ persons, no culpability is fastened on them as they have no free will.

The section itself provides that the benefit is available only after it is provedÂ  that at the time of committing the act, the accused was labouring under such a defect of reason, from disease of the mind, as not to know the nature and quality of the act he was doing, or that even if he did not know it, it was either wrong or contrary to law then this section must be applied. The crucial point of time for deciding whether the benefit of this section should be given or not, is the material time when the offence takes place. In coming to that conclusion, the relevant circumstances are to be taken into consideration, it would be dangerous to admit the defence ofÂ insanity upon arguments derived merely from the character of the crime. It is only unsoundness of mind which naturally impairs the cognitive faculties of the mind that can form a ground of exemption from criminal responsibility.

Stephen in History of the Criminal Law of England has observed that if a person cuts off the head of a sleeping man because it would be great fun to see him looking for it when he woke up, would obviously be aÂ caseÂ where the perpetrator of the act would be incapable of knowing the physical effects of his act. The law recognizesÂ nothing but incapacity to realizeÂ the nature of the act and presumes that where a man's mind or his faculties of ratiocination are sufficiently dim to apprehend what he is doing, he must always be presumed to intend the consequence of the action he takes. Mere absence of motive for a crime, howsoever atrocious it may be, cannot in the absence of plea and proof of legalÂ insanity, bring theÂ caseÂ within this section. This Court inÂ Sheralli Wali Mohd. v. State of MaharashtraÂ (1973) 4 SCC 79 held that: "The mere fact that no motive has been proved why the accused murdered his wife and children or the fact that he made no attempt to run away when the door was broken open, would not indicate that he wasÂ insaneÂ or that he did not have the necessary mens rea for the commission of the offence."