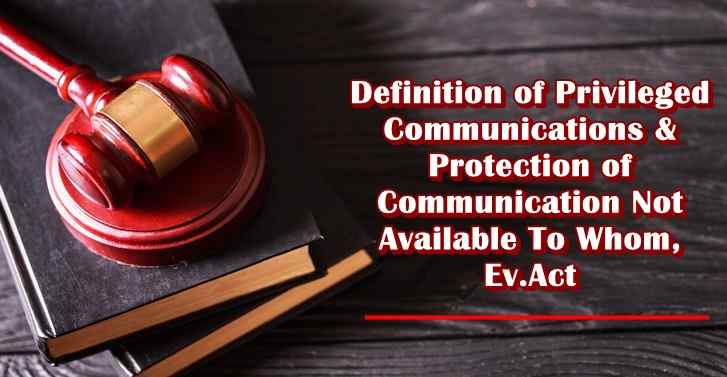 Hello Friends, Blog below is related to,Â Definition of Privileged Communications & protection of communication not available to whom, as given in IndianÂ  Evidence Act, 1872 ,Â the form of Questions with Answers,Â as oftenly asked in Judicial Mains,Â with intention to assist those Judicial Aspirants who are preparing for such examinations, alongwith its video link in the name of -Â SatyaRajLaws [email protected]Â  Â  Â  =Â Â https://youtu.be/ypKz8jv6CN4

Qts.) Exceptions to âthe general rule is that a witness is bound to tell the whole truth and to produce any document in his possession, relevant in issue.â Define Privileged Communications & State protection of communication is not available to whom.

Ans.)Â Privileged CommunicationsÂ (Incompetent witnessÂ â They becomes competent due to the exception given in the related section itself) â It has not been defined in the Evidence Act.

-Generally speaking, privileged meant special advantage or right and privileged communications meant such statements which are protected by law against disclosure in consideration of public policy.

Principles:-These communication is based upon following 4Â principles:- a) Public Policy and Rule of Morality, b)To protect the mutual relationship, c) To maintain the secrecy of legal/social status, d) To maintain Supremacy of public welfare and public feelings (Salus populi suprema lex estoÂ â public interest is the supreme law).

Which are privileged from disclosure as u/s 122, where husband and wife are prevented from the disclosure any communication made between them during their marriage.

Which is prohibited from being disclosed as mentioned in section 121 to 131.

Section 121 âÂ JudgesÂ (r/w S. 19 of IPC & S.2 (8) of CPC) orÂ MagistratesÂ (Arbitrators appointed by the Court) â only on the special order of Superior Court, to which he is subordinate, be compelled to answer any questions as to his conduct in Court or as to anything which come to his knowledge in Court as such Judge or Magistrate.

1) Here privilege to marriage communications remainÂ maintainedÂ even after Divorce or Death of either party.

1) Here such privilege communicationsÂ ceasesÂ to exist after Death or Divorce of either party.

2) The express consent of the either parties or their legal representatives are quiteÂ essentialÂ before disclosure of such communications.

2) Here isÂ noÂ need of consent of party or their legal representatives for disclosure of such communications.

Section 123 âÂ Evidence as to affairs of StateÂ â No one shall be permitted to give any evidence derived fromÂ unpublished official recordsÂ relating to any affairs of State, except with the permission of the officer as the head of the department concerned, who shall give or withhold such permission as he thinks fit.

Section 124 âÂ Official CommunicationsÂ â No public officer shall be compelled to disclose communications made to him in official confidence, when he considers that the public interests would suffer by the disclosure.

Section 126 (r/w sec.127, 128 & 129) âÂ Professional CommunicationsÂ â No barrister, attorney, pleader or vakil, shall at any time be permitted, unless with hisÂ clientâs expressÂ (written) consent, to disclose any communication (either any facts or advice) made to him in the course and for the purpose of his employment. (After Advocate Act 1961 â all barrister, attorney, pleader or vakil has been replaced by Advocate)

Section 127 âSection 126, shall apply toÂ interpreters, and the clerks or servantsÂ of barristers, pleaders, attorneys and vakils.

Section 128 âÂ PrivilegeÂ notÂ waived by volunteering evidence - if any party to a suit or proceeding gives evidence there at his own instance or otherwise, he shall not be deemed to have consented, thereby to such disclosure as mentioned u/s 126.Â

Section 129 âÂ Confidential communications with legal advisorsÂ â shall not be compelled to disclosed, unless he/she (clients) offers himself/herself as a witness,Â only for explainingÂ such communications and not otherwise.

Section 131 âÂ Production of documents orÂ electronic recordsÂ which another person, having possession or control, could refuse to produce, unless such latter person consents to produce the same.