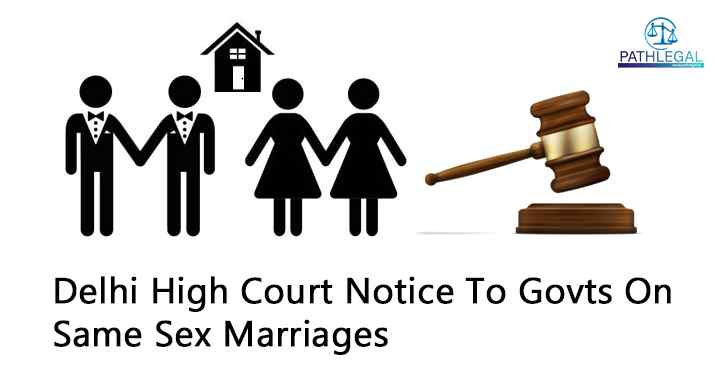 The Delhi high court on Wednesday sought responses from the Centre and the Delhi government on pleas by two same-sex couples seeking legal recognition of their marriages under two different civil laws, the Special Marriage Act (SMA) and the Foreign Marriage Act (FMA), and observed that âlaws are gender-neutralâ and are for the rights of âevery citizenâ.

A bench of justices Rajiv Sahai Endlaw and Asha Menon said that marriage is not defined in both acts, but the concept emanates and is interpreted under customary laws which do not recognise same-sex marriages.

Issuing notice to the authorities, the bench stated that inhibitions could be shed after Rajkumar Yadav, one of the counsels for the Centre submitted that the pleas presented a peculiar circumstance and that such a situation has not been faced in 5,000 years of Sanatan Dharma.

âWe may shed our inhibition. The laws are gender-neutral. You please try to interpret the law for the citizens of Sanatan Dharma in the country. This is not an adversarial litigation. This is for the right of every citizen of the country,â justice Menon said.

During the proceedings, the court said that SMA was enacted as there were no customs for inter-faith and inter-caste marriages, and stated that once same-sex marriage is recognised under the customary laws, other statutes like SMA and FMA would follow suit. It stated that if the petitioners wished to make any change in their pleas to challenge the definition of marriage, now was the time to do so.

âPlease understand that till the concept of marriage is not challenged, it would not be able to move forward in the matter because marriage is not defined. There is otherwise no question on the maintainability of the pleas but in both the Special Marriage Act and Foreign Marriage Act, the term marriage has not been defined,â said the court.

However, senior advocate Menaka Guruswamy who argued for the petitioners said the plea was not to challenge customary or religious laws, but discrimination by civil laws. âThis is about the civil law, a statute provided by the Indian law for inter-caste, inter-faith, modern couples, same sex couple etc,â she said and added that past judgments have held that sexual orientation cannot be grounds for discrimination.

The court posted the matter for further hearing on January 8, 2021.

The first petition was filed by two mental health professionals â Kavita Arora, 47, and Ankita Khanna, 36 â who said they had been living together as a couple for eight years, took care of each othersâ parents, were in love with each other, but unable to marry each other.

âThe petitioners are like any other couple you might meet, except they are both women,â their petition read.

The second petition was filed by two men â Vaibhav Jain, an Indian citizen, and Parag Vijay Mehta, an overseas citizen of India â who got married in the United States, where same-sex marriage is legal, in 2017. An Indian consulate refused to register their union this year under the 1969 Foreign Marriage Act.

The two have been in a relationship since 2012 and are supported by families and friends, also they claimed that during the Covid-19 pandemic, Indiaâs non-recognition of their marriage prevented them from travelling to India as a married couple.

âThe petitioners submit that non-recognition of same-sex marriages is a wanton act of discrimination that strikes at the root of dignity and self-fulfillment of LGBTQ (lesbian, gay, bisexual, transgender, queer) couples,â the petition read.

The two women said that issues like opening a joint bank account, buying family health insurance, or securing address proof â things that a married couple takes for granted â were a struggle for them. On September 30, they approached the marriage officer (the sub-divisional magistrate, South East Delhi, Kalkaji) seeking solemnisation of their marriage under the Special Marriage Act, 1954.

âThe marriage officer would have solemnised the marriage of any similarly placed opposite-sex couple. Sexual orientation discrimination is constitutionally prohibited under Article 15, but the petitioners were refused the right to marry a person of their choice on grounds of their sexual orientation alone,â they said.

The petitions argued that the non-recognition of marriage between LGBTQ persons violated the fundamental rights of liberty, equality, life and freedom of expression guaranteed to them by the Supreme Court judgment, Navtej Johar vs Union of India, which decriminalised adult, consensual same-sex relations in 2018.

The two petitions before the court on Wednesday were represented by senior advocate Menaka Guruswamy and advocates Arundhati Katju, Govind Manoharan and Surabhi Dhar. Guruswamy and Katju were among the lawyers who argued the case against Section 377 of the Indian Penal Code which led to the Supreme Court decriminalising homosexuality in 2018.