Distinguish Between FIR And Complaint 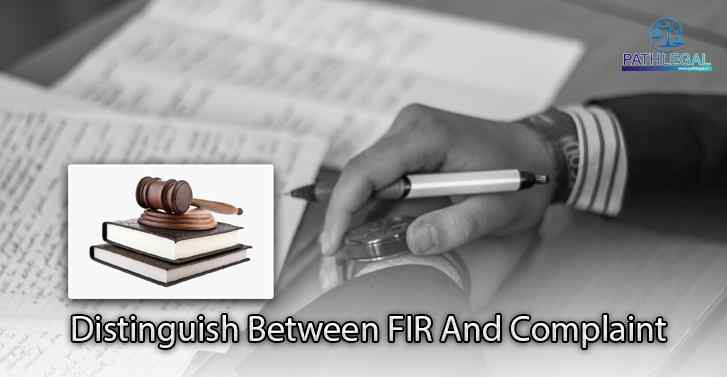 FIR or First Information Report and complaint may seem similar but they do have their differences. So, let us look into what distinguishes FIR from a complaint.

FIR is the document prepared by the police when a complaint is made to the police by the victim of a crime or any person who has been a witness to a crime. FIR is related to a cognizable offence and has to be lodged at the police station near the occurrence of crime. FIR has a defined format. Section 154, Cr.P.C., is related to FIR. If not registered, under Section 154(3), Cr.P.C., aggrieved can reach Superintendent of Police by post or in writing.

The prepared FIR is read out so that informant can verify it as to its contents and is signed by the informant who is given a copy too. The contents of FIR includes name and address of informant, Â Â facts, place, time and date of the commission of the crime. On preparing FIR, investigation regarding the matter begins.

In cases where FIR is not lodged by police, Magistrate can be approached under Section 156(3), Cr.P.C. wherein Magistrate can order for the investigation to be done.

A complainant makes a complaint to Magistrate in relation to the commission of a crime. Section 2(d), Cr.P.C. speaks about complaint. A complaint does not have any defined format. Complaint can be for cognizable as well as non-cognizable offences.

ââ Thus in Mohd. Yousuf v. Afaq JahanÂ this Court observed: (SCC p. 631, para 11) â11. The clear position therefore is that any Judicial Magistrate, before taking cognizance of the offence, can order investigation under Section 156(3)Â of the Code. If he does so, he is not to examine the complainant on oath because he was not taking cognizance of any offence therein. For the purpose of enabling the police to start investigation it is open to the Magistrate to direct the police to register an FIR. There is nothing illegal in doing so. After all registration of an FIR involves only the process of entering the substance of the information relating to the commission of the cognizable offence in a book kept by the officer in charge of the police station as indicated in Section 154Â of the Code. Even if a Magistrate does not say in so many words while directing investigation underÂ Section 156(3) of the Code that an FIR should be registered, it is the duty of the officer in charge of the police station to register the FIR regarding the cognizable offence disclosed by the complainant because that police officer could take further steps contemplated in Chapter XII of the Code only thereafter.ââ Lawyers in India can provide further details.