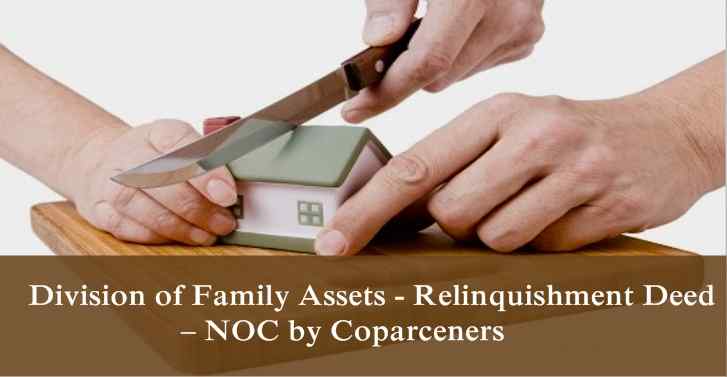 Division of assets, also commonly known as division of property, is one of the most debatable topics in India. Earlier, through the implementation of Hindu Succession Act, 1956 a girl in a particular family was allowed to claim her part of the propertyequally like her brothers unless there is a will executed by her father for the division of property. However, due to certain ambiguity and due to non-flexibility of this law, a recent amendment was made to this legislation. The recent amendment in the existing law has allowed the women who are born before the year 2005 to claim the property.

However, there are still a lot of cases, where the women of the family do not claim her share in fatherâs property. In such circumstances, her share needs to be entitled to someone in the family, and this process is known as the division of assets. Normally, a woman transfers her rights to share in the property to her brother as he mostly already has a share in the property.

Ways through which transfer of property can happen

This article focuses on how a daughter or sister can transfer her part of share in the ancestral property to someone else in the family. There are mainly two ways to do it.

As the name suggests, a non-objection certificate is signed when an individual legally wants to explain that he/she has no objection in doing a particular thing. Therefore, such scenario arises when a will is not executed as there is no proof how the property is to be divided between members of the family.

When a daughter signs a non-objection certificate (NOC), she states that she has no objection in transferring her share of the property to someone else in the family. This certificate is one of the most important certificates that is required to transfer the property in the case where no will is executed by the deceased of the family.

An individual who receives a legacy under the will, or who obtains a property after the death of a person automatically without even the execution of a will is called the legatee or legal heir. However, if the legal heir chooses to give up rights in the share of the property, he or she will have to present a written letter in favor of other heirs (NOC), stating they are giving up their claim in the said property and in such a case, the children of this said person will also not be able to stake claim over the property in future.

What is a relinquishment deed?

Relinquishment deed is a legal instrument where a legal legatee gives up or releases his legal rights in a hereditary parental property for another legal heir.

Who can Relinquish a Property?

Any person who has a share in the property and who is capable of making relinquishment of property. In a circumstance that there is more than one proprietor in a property, either of the co-owners can do the relinquishment. For a valid relinquishment, the basics of a valid agreement are to be followed other than the reimbursement other than the consideration.

A relinquishment deed is a document by which an individual formally gives up his assets to another person, and the said deed must be methodically executed and registered in accordance Section 17 of the Registration Act, 1908.

Lalitha James and others v. Ajit Kumar and others

Facts of the case:

P.S. Chouhan held vast properties. He died unmarried and issueless as well as was determined to give away the said properties to his two sisters named Mrs Dayabai and Gracebai by executing a gift deed in 1935. There had been no partition between them. Mrs Dayabai was survived by appellants 2,3and 4. Gracebai survived by appellant 1, named Mrs Lalita Jaems, and respondent no. 3, namely Mrs Park. The 5.74 acres of land was divided between the survivors of Gracebai. Respondent no. 3 sold her share to Respondent no. 2 for Rs. 14,000/-. Later on, the transferee commenced digging the land to raise a structure. It was objected to by appellant no.1 as well as a suit was filed by Respondent 2.

The Trial Court dismissed the suit since the vendor was not in possession as well as the sale did not confer any right or title on them, whereas they can get their money refunded. The Court held that the respondent no 3 was in exclusive possession of the land, whereas rightfully sold it to the respondent no. 2.

The Madhya Pradesh High Court highlighted that it is the strength of the plaintiff's title and not the absence of the defendant's title that matters. A purchaser of the undivided property from a co-owner's share is not entitled to possession of any particular part of the joint property. His right would be for joint-ownership and not for exclusive ownership of any part of the joint property. A transferee is not in a better position than the co-owner himself. Section 44 of the Transfer of Property Act gives sanction to this principle. Therefore, the High Court held that the respondents were entitled to enforce the partition of the joint estate. The Court did not accept the sale of the exclusive property and allowed the appeal.

The Delhi HC considered various judgments of the Supreme Court and several High Courts and laid down the following test to determine whether a deed can be considered a release/relinquishment deed.

Through this judgment, the Delhi High Court has laid down a consolidated test to make it convenient for the comman man to gauge the difference between a release deed and a gift deed.

The transfer of ancestral property between legal heirs is a matter of concern always as it becomes a tough job, especially when there is no will executed by the owner of the ancestral property. In many circumstances, even when a will is executed, there are high chances that the heirs may not be satisfied with it and eventually challenge the will in the desired courts. Through the new amendment in the law, where a daughter can equally claim for her share in the property it has become important that the will is drafted in such a manner that it satisfies all the necessary prevailing laws in the country.

However, in most of the circumstances, a daughter refuses for her share in the property and often ends up in giving up her share of the property to her brother or mother. Such a process needs to be complied with the process explained above, for it to it be a legal and valid transfer in the eyes of the law.

The author of this blog/Article isÂ Kishan Dutt Kalaskar, a Retired Judge and practising advocate Â having an experience of 35+ years in handling different legal matters. He has prepared and got published Head Notes for more than 10,000 Judgments ofÂ  the Supreme Court and High Courts in different Law Journals.Â  From his experience he wants to share this beneficial information for the individuals having any issues with respect toÂ their related mattersÂ .