Documents in Commercial Suits Must Be Filed Within 45 Days: Delhi HC 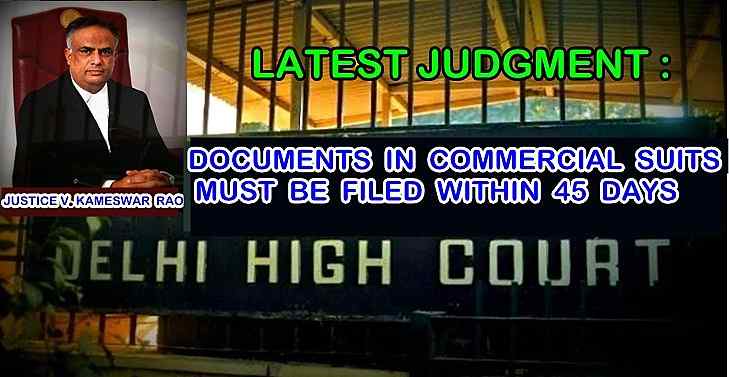 The Delhi High CourtÂ  Justice V. KAMESWAR RAO was delivered the judgment.Â  The fact of the case wasÂ  maximum period for filing reapplication or an affidavit for admission/denial of documents is 45 days and the same has to be mandatorily followed. In the present application, the Petitioner had challenged the order of the Joint Registrar which had disallowed the Petitioner to file an affidavit for admission/denial of documents after the termination of the 45 days period. The Petitioner company had argued that the Joint Registrar did not take into consideration cogent reasons for the delay as put forward by it, and the order was passed in haste. On the issue of law, it also submitted that as per Rules 14 and 16 of Chapter 1 of Delhi High Court (Original Side Rules), 2018, it is not mandatory for the Registrar to follow the timelines set under the said Rules for submission of documents.

In Â CS(COMM) 1261/2018 & I.A. No. 10178/2019 and O.A. No. 81/2019 ODEON BUILDERS PVT. LTD., versus Â NBCC (INDIA) LIMITED FORMERLY KNOWN AS NATIONAL BUILDINGS CONSTRUCTION CORPORATION LTD case Â defense counsel referred with Jainsons Export India v. Binatone Electronics Ltd. 58 (1995) DLT 571 and Sushil Jain v. Shri Meharban Singh and Ors CS(OS)Â  to contend that the courtâs power is not fettered or circumscribed by any Rules of prescribed procedure which are made for promoting the ends of justice and not to thwart justice.

A similar provision of this nature in the context of Arbitration and Conciliation Act, 1996 had come up for consideration before the Supreme Court in the case of Union ofÂ  India v. Popular Construction Company (2001) 8 SCC 470. 12. As far as the language of Section 34 of the 1996 Act is concerned, the crucial words are 'but not thereafter' used in the proviso to sub-section (3). In our opinion, this phrase would amount to an express exclusion within the meaning of Section 29(2) of the Limitation Act, and would, therefore, bar the application of Section 5 of that Act. Parliament did not need to go further. To hold that the Court could entertain an application to set aside the award beyond the extended period under the proviso, would render the phrase 'but not thereafter' wholly otiose. No principle of interpretation would justify such a result. Read more legal judgmentÂ in Indiaâ¦.