Essence of a Womans Modesty is Her Sex. Do you Agree? 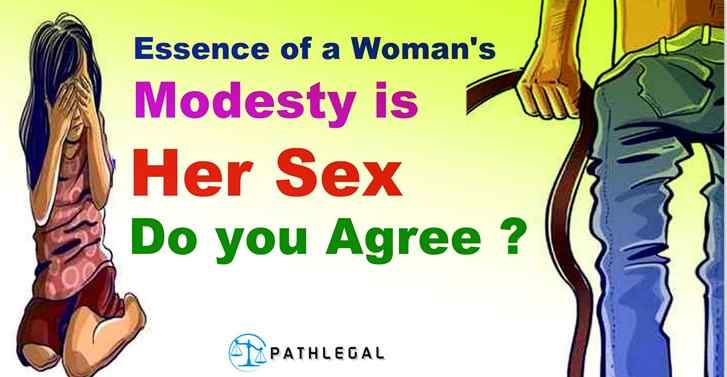 What is modesty means?

The supreme court in State of Punjab v Major Singh considered the question of what modesty means, when it be held that a particular act is said to have outraged a womanâs modesty, and whether the modesty of an infant child can be outraged at all. This case involved causing injury to the vagina of the child, who was seven and a half months old female child. A famous criminal lawyers in India is appearing for the accused. According to the majority view, the act of outraging the modesty of a woman was not limited by the age of the victim, and whether the victim knew or was conscious about the offensive act being committed on her. The following are the principles evolved by the two judges who delivered the majority judgment that the offender had committed an offence of outraging the modesty of the infant 7 and half months old female child.

According to Bachawat J:

The essence of a woman's modesty is her sex. Even a female of tender age from her very birth possesses the modesty which is the attribute of her sex under Section the culpable intention of the accused is the crux of the matter.Â  The reaction of the woman is very relevant, but its absence is not always decisive, as for example when the accused with a corrupt mind stealthily touches the flesh of a sleeping woman. She may be an idiot, she may be under the spell of anesthesia, she may be sleeping, she may be unable to appreciate the significance of the act, and nevertheless, the offender is punishable under the section.

According to Mudholkar J, the womanâs reaction is not the sole test to see whether an act amounts to outraging the modesty of a woman. According to him when any act is done to or in the presence of a woman is clearly suggestive of sex, according to common notions of mankind, that act must fall within the mischief of this section. Thus in view of the judgment of the majority, the accused Major Singh was convicted for an offence of outraging the modesty of a woman under section 354 IPC, sentenced to two years rigorous imprisonment and fine of Rs 1000 of which Rs 500 was directed to be given to the child who had suffered in his hands.