Essentials Of An FIR 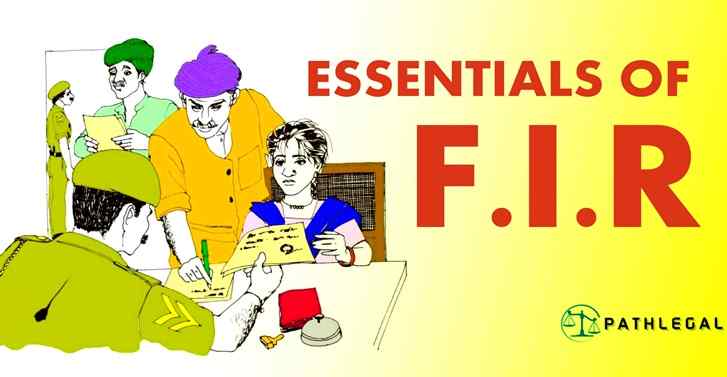 FIR or First Information Report is a document prepared in written form by the police on receiving first information about an act of crime committed which is cognizable and consists of information about the person who came to the police to file FIR, details about crime according to the informant.

This is the start of the process of getting justice and this is the first step. It should not be unclear or have no clarity or any fictional story but has to be details witnessed by informant. The person filing FIR can be a victim or on behalf of victim or any person who witnessed the crime being committed.

After the filing of FIR, investigation of the crime begins. The complainant should get a copy of FIR which would be free and to be given by the police. It is given under section 154 of the Code of Criminal Procedure.

What Are The Essentials Of FIR?

An FIR must contain:-

1. What is the information to be conveyed

The information given by the person should be all factual and accurate details as seen during the commission of a crime. No false or fictional details should be given in FIR. Information given should not be vague.

The person giving the information to file FIR should specify in what capacity he/she is filing FIR. The person can be the victim or giving on behalf of the victim or eye-witness to the crime being committed

3. who and against whom crime was committed

Also, the person has to give details as to against whom the crime was committed and mention the victim in case the informant is not the victim.

4.When, where, for what reason and which way it was committed

Details about at what time or approximate time the crime was committed, at which place it was committed so as to know under which jurisdiction of the police station it is, the reason for the commission of crime and how and in what way it was committed has to be provided like whether it was done by weapons or any sharp objects or in any other way.

Details about the witnesses are required to be given like name and address and whether they try to save the victim and specifically describe the manner in which they tried to rescue the victim.

6.any clues left by accused

If any clues or traces are left by accused then details of that have to be given to police. The traces can be a knife or anything belonging to the accused.

7. any object or anything missing

Also, it needs to be specified if anything was missing from the scene of crime and description of the particular and its specifications of the missing object. It might provide a hint as to the reason for the commission of the crime. For further information, contact Lawyers in India.