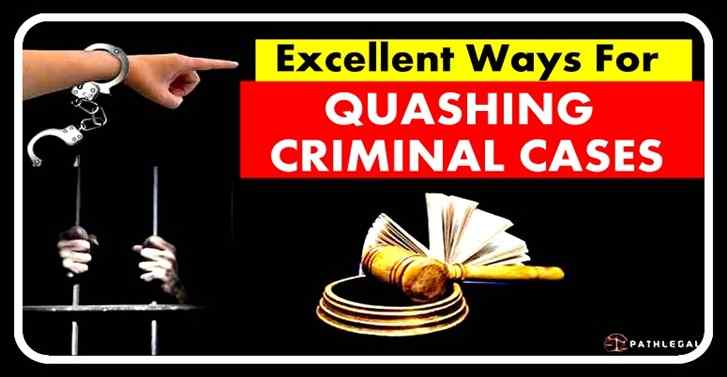 Code of Criminal Procedure 1973 has laid out the provisions for quashing of criminal proceedings.
Section 482 of CrPC says,"Saving of inherent powers of High Court Nothing in this Code shall be deemed to limit or affect the inherent powers of the High Court to make such orders as may be necessary to give effect to any order under this Code, or to prevent abuse of the process of any Court or otherwise to secure the ends of justice."

Recently, a Division Bench of the Supreme Court comprising Justice L. Nageswara Rao and Justice MR Shah inÂ Sau. Kamal Shivaji PokarnekarÂ v.Â The State of Maharashtra held that criminal complaints cannot be quashed merely because the allegations made therein appear to be of a civil nature.

The Appellant, for this situation, filed a complaint in 2008 and blamed the Respondents for falsification and preparing false documents. The complaint was sent for examination and the police presented a report expressing that the issue appeared to be of a civil nature. Notwithstanding, the Trial Court guided the issuance of the procedure to the Respondents.

The High Court of Bombay set aside the process issued by the Trial Court pursuant to its powers under Section 482 of the Code of Criminal Procedure, 1973Â ("Cr.P.C")Â on the ground that the dispute was of a civil nature, and criminal proceedings against the Respondents would be an abuse of the process of law.

The Supreme Court laid emphasis on the principles laid down in two of its previous judgements namely,Â State of KarnatakaÂ v.Â M. Devendrappa andÂ Indian Oil CorporationÂ v.Â NEPC India Ltd. & Ors. and held that quashing of criminal proceedings is called for only when the complaint does not disclose any offence or the complaint is frivolous, vexatious, or oppressive.

Gujarat high court has held that criminal cases with âoverwhelmingly and predominantly civil flavourâ can be quashed. The high courtÂ elaborated on what kind of cases can quashÂ it said that the court may interfere in cases of offence particularly those arising fromâ âcommercial, financial, mercantile, civil and partnership or such type of transactions.ââ
Lawyers in India can refer to the above cases.