Executability And Enforceability Of Foreign Judgments And Decrees In India 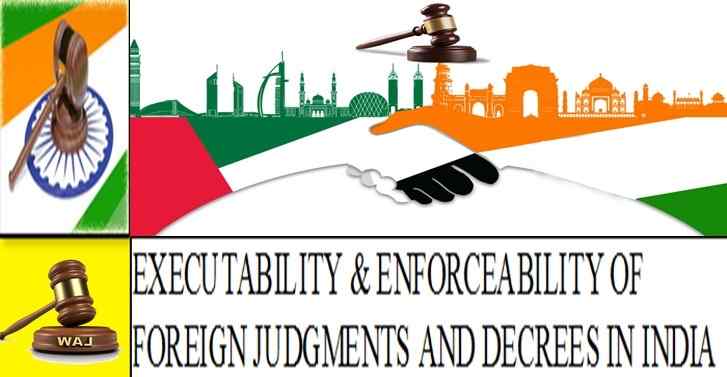 A foreign judgment in India can be enforced in the following ways:

What is a Reciprocating Territory?

"Reciprocating Territory" is defined in explanation 1 to Section 44A of Civil Procedure Code as:

"Any country or territory outside India which the Central Government may, by notification in the Official Gazette, declare as a reciprocating territory." The List of Reciprocating Territories under the Civil Laws in India are United Kingdom, Singapore, Bangladesh, UAE, Malaysia, Trinidad & Tobago, New Zealand, the Cook Islands (including Niue) and the Trust Territories of Western Samoa, Hong Kong, Papua and New Guinea, Fiji, Aden.

"A combined reading of section 13 and 44A makes it clear that a decree of a reciprocating territory can be executed through a district court, and the judgment debtor is entitled to contest the execution petition if it can be shown that the judgment is not conclusive, i.e., it comes within any of the exceptions under section 13 to (f ).

Enforceability of Judgments from the non-reciprocating territories of India.

Â For enforcing a foreign Judgment or an Award from a âNon-Reciprocating Territoryâ of India, a fresh suit in an Indian Court with appropriate Jurisdiction needs to be instituted. Further, Judgments from a âNon-Reciprocating Territoryâ only have evidentiary and persuasive value in the eyes of India Judiciary and they must be filed for enforcement within three years from the day when they were originally passed. Â No doubt that Foreign Judgments from Non-Reciprocating Territories need to pass through the sieve of Indian Judiciary but the sieve used is broad and spacious enough to allow the sink in of âthe cause of Justiceâ upheld by the courts of Foreign Countries.

The following are the cases in which the Courts have held that there is jurisdiction with the foreign Court.

The Supreme Court in the case of Shalig Ram v. Firm Daulatram Kundanmal , held that filing of an application for leave to defend a summary suit in a foreign court amounted to voluntary submission to the jurisdiction of the foreign Court.

In the case of Chormal Balchand Firm v. Kasturi Chand , the Calcutta High Court while considering the issue of submission to jurisdiction held that in case a defendant appears in the Court where the suit is instituted and questions both the jurisdiction and challenges the action on merits, he is said to have submitted to the jurisdiction voluntarily.

In the case ofÂ  Oomer Hajee Ayoob Sait v. Thirunavukkarasu Pandaram , the Madras High Court while dealing with the issue of submission to jurisdiction held that mereÂ  conduct or circumstances indicative of intention to submit to the jurisdiction is enough to derive a conclusion of submission to jurisdiction. In the present case, during the pendency of the suit, plaintiff effected attachment before judgment of certain property of the defendant and the defendant by a letter acknowledged the attachment and requested merely for a concession, which was not a conditional request and when the offer is refused and the defendant remained ex parte and the suit was decreed, it was deemed that the defendant submitted to the jurisdiction of the foreign Court.

India is party to bilateral treaties with the reciprocating countries notified under the Code of Civil Procedure 1908Â  for the purpose of recognition and enforcement of foreign judgments, namely the United Kingdom, Aden, Fiji, Republic of Singapore, the United Arab Emirates, Federation of Malaya, Trinidad and Tobago, New Zealand, the Cook Islands (including Niue) and the Trust Territories of Western Samoa, Hong Kong, Papua and New Guinea and Bangladesh. India follows the basic and customary principles of international law for entering into these treaties, including the principles of comity and res judicata.

Which remedies ordered by a foreign court are enforceable in Indian jurisdiction?

Remedies granted by courts of non-reciprocating territories are not directly enforceable in India and for that purpose a new civil suit has to be filed. Remedies awarded by superior courts of reciprocating territories, however, are enforceable under section 44A of the Code, provided such decrees are money decrees (not including taxes or other charges of a similar nature, in a fine or other penalty or a sum payable under an arbitral proceeding). Furthermore, judgments granting injunction (mandatory or prohibitory) and judgments passed in default (ie, ex parte foreign judgments) that are final and conclusive in nature, are executable in India.