Fatehpur: FIR Against Journalists For Spreading Fake News Of Rape 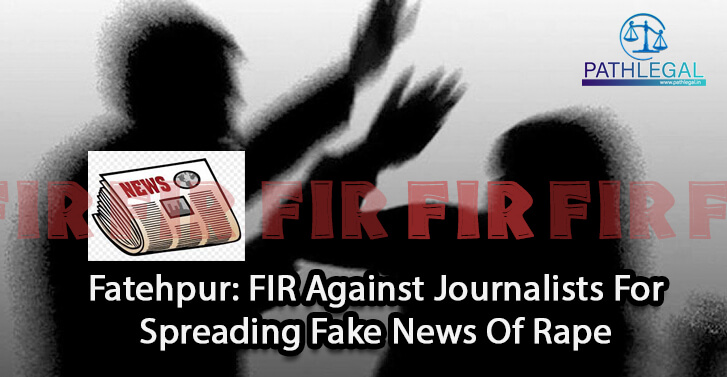 The FIR, lodged at Asothar police station in the district, has named âjournalists of Bharat Samachar"âa TV news channel â and a freelance journalist, identified as Dhara Singh Yadav.

Police in Fatehpur district have registered an FIR against journalists for allegedly spreading fake news on Twitter about the alleged rape of two Dalit girls.

The FIR, lodged at Asothar police station in the district, has named âjournalists of Bharat Samacharââa TV news channel â and a freelance journalist, identified as Dhara Singh Yadav.

According to Circle Officer (Thariaon) AnilKumar, the bodies of two Dalit sisters â aged 8 and 11 â were found in a pon on Monday. âThe pond is deep. While trying to pluck water chestnuts, the girls drowned. Then some journalists started spreading fake news that they were raped and murderedâ¦ I will be part of our investigation on how many journalists were involved in spreading the fake news,â said Kumar.

The complaint filed by Asothar Station Officer Ranjeet Bahadur Singh, based on which the FIR was registered, stated: â was on patrol duty at Chichnivillage and Bala Bala town when I came to light that Bharat Samacharâs journalists and Dhar Singh Yadav, a journalist, were spreading fake news on Twitter about the death of two girls in the area under the police station. The girls had died while trying to pluck water chestnut from the pond, while these journalists were spreading fake news to create animosity between the Dalit and other communities. The journalists were spreading baseless news on Twitter that the girlsâ bodies were thrown in the pond with their hands and leg tied, and they were raped and their eyes were taken out. This led to chaos among people and pose a hindrance to government work.

âThis kind of fake news being shared on Twitter is leading to enmity between groups and the Dalit community,â it added.

The FIR has been lodged under IPC sections153-A (promoting enmity between different groups),353 (assault or criminal force to deter public servant from the discharge of his duty), and Section 7 of the Criminal Law Amendment Act. Section 67 of the Information Technology Act has also been invoked against the accused.

Circle Officer Kumar said that in the post-mortem report of the two girls, rape has not been mentioned âNeither any damage to their eyes has been stated in the report. The cause of death in the postmortem report has been a death due to drowning. A special team with an eye specialist and female doctors was also constituted to conduct the postmortem,â Kumar added