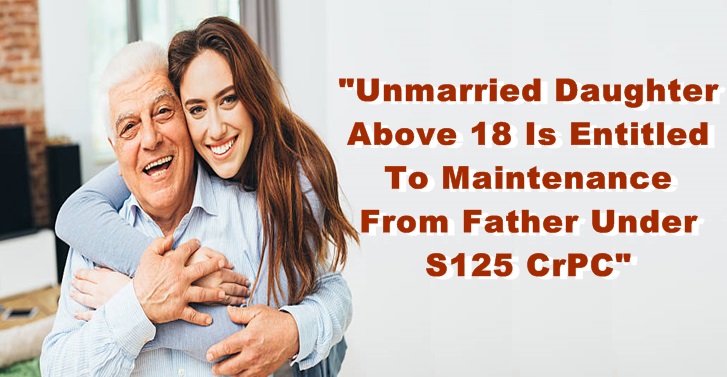 In a recent judgment, the high court stated that fathers are obliged to support daughters till they are married. It means that unmarried daughters can claim maintenance from father if she is unable to maintain herself. In the petition, the daughter had challenged the order of lower court by rejecting the petition under section 125 of CrPc. The daughter has been aged 18 years old. She seeks the petitionÂ  by claiming that she is unable to take care of her expenses incurred by her towards her education. But the court stated that the petitioner is not entitled to maintenance that she does not suffer any physical or mental disablement. The Topmost Family Court Lawyers In India will deal with such issues.

Section 125 in The Code Of Criminal Procedure, 1973 states about Order for maintenance of wives, children, and parents.

(a)Â his wife, unable to maintain herself, or

(b)Â his legitimate or illegitimate minor child, whether married or not, unable to maintain itself, or

(c)Â his legitimate or illegitimate child (not being a married daughter) who has attained majority, where such child is, by reason of any physical or mental abnormality or injury unable to maintain itself, or

(d)Â his father or mother, unable to maintain himself or herself, a Magistrate of the first class may, upon proof of such neglect or refusal, order such person to make a monthly allowance for the maintenance of his wife or such child, father or mother, at such monthly rate not exceeding five hundred rupees in the whole, as such Magistrate thinks fit, and to pay the same to such person as the Magistrate may from time to time direct: Provided that the Magistrate may order the father of a minor female child referred to in clause (b) to make such allowance, until she attains her majority, if the Magistrate is satisfied that the husband of such minor female child, if married, is not possessed of sufficient means. Explanation.- For the purposes of this Chapter,-

(b)Â " wife" includes a woman who has been divorced by, or has obtained a divorce from, her husband and has not remarried.

(3)Â If any person so ordered fails without sufficient cause to comply with the order, any such Magistrate may, for every breach of the order, issue a warrant for levying the amount due in the manner provided for levying fines, and may sentence such person, for the whole or any part of each month' s allowances remaining unpaid after the execution of the warrant, to imprisonment for a term which may extend to one month or until payment if sooner made: Provided that no warrant shall be issued for the recovery of any amount due under this section unless application be made to the Court to levy such amount within a period of one year from the date on which it became due: Provided further that if such person offers to maintain his wife on condition of her living with him, and she refuses to live with him, such Magistrate may consider any grounds of refusal stated by her, and may make an order under this section notwithstanding such offer, if he is satisfied that there is just ground for so doing. Explanation.- If a husband has contracted marriage with another woman or keeps a mistress, it shall be considered to be just ground for his wife' s refusal to live with him.

(4)Â No Wife shall be entitled to receive an allowance from her husband under this section if she is living in adultery, or if, without any sufficient reason, she refuses to live with her husband, or if they are living separately by mutual consent.

(5)Â On proof that any wife in whose favour an order has been made under this section is living in adultery, or that without sufficient reason she refuses to live with her husband, or that they are living separately by mutual consent, the Magistrate shall cancel the order.

For more details, you can refer to lawyers in India.