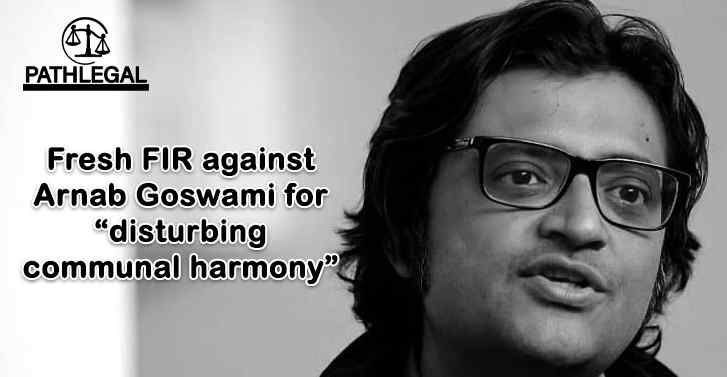 A fresh FIR has been registered against Republic TV editor and owner Arnab Goswami for allegedly trying to disturb communal harmony. The police said that the case was registered on Saturday, after the secretary of Raza Educational Welfare society, Irfan Abubakar Shaikh approached Mumbaiâs Pydhonie police.

In the statement, the complainant said that Goswami tried to create hatred against the Muslims in the country during a show on April 29.

âThe channel had telecasted the protest of migrants that had gathered near Bandra railway station on April 14, during which he had raised a question as to why are mob gathering only near mosques during lockdown,â said the complainant in his statement to police.

âThe migrants that had gathered near the railway station had no links with the mosques despite that the channel highlighted the issue and tried to create communal disturbance. They are trying to show that Muslims are responsible for the spread of the infection,â Shaikh further said to the police.

The complainant also handed over the footage of the show on a pen drive, which the police claim will act as crucial evidence in the case.

Recently on April 27,Â Mumbai Police had interrogated Goswami for over 12 hours. An FIR had been filed against Goswami after a complaint was filed by Maharashtra Energy Minister Nitin Raut over his statements in his show against Congress chief Sonia Gandhi on the Palghar lynchingÂ case.