Guidelines For Police Officers When Section 498A Is Misused 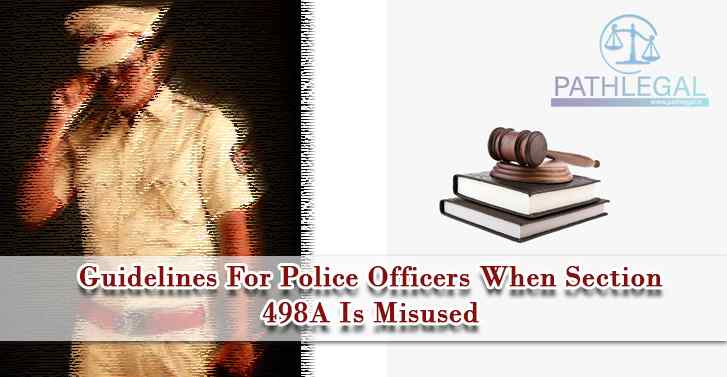 Though Section 498A of the Indian Penal Code was brought about to put a stop to the cruelty meted out to a woman in her marriage by her husband or his relatives . But the section is being misused by women by making false allegations to hurt her husband or his family members .

The Supreme Court in the case :

Â gave certain guidelines to be followed by police officers before arresting under Section 498A of Indian Penal Code. The guidelines are :

â11.1 All the State Governments to instruct its police officers not to automatically arrest when a case under Section 498-A of the IPCÂ  is registered but to satisfy themselves about the necessity Â for arrest under the parameters laid down above flowing from Section 41 , Cr. PC;

11.2 All police officers be provided with a check list containing specified sub-clauses under Section 41(1)(b)(ii);

11.3 The police officer shall forward the check list duly filed and furnish the reasons and materials which necessitated the arrest , while forwarding /producing the accused before the Magistrate for further detention ;

11.4 The Magistrate while authorizing detention of the accused shall peruse the report furnished by the police officer in terms aforesaid and only after recording its satisfaction , the Magistrate will authorize detention;

11.5 The decision not to arrest an accused , be forwarded to the Magistrate within two weeks from the date of the institution of the case with a copy to the Magistrate which may be extended by the Superintendent of police of the district for the reasons to be recorded in writing ;

11.6 Notice of appearance in terms of Section 41A of Cr.PC be served on the accused within two weeks from the date of institution of the case , which may be extended by the Superintendent of Police of the District for the reasons to be recorded in writing ;

11.7 Failure to comply with the directions aforesaid shall apart from rendering the police officers concerned liable for departmental action , they shall also be liable to be punished for contempt of court to be instituted before High Court having territorial jurisdiction .

11.8 Authorising detention without recording reasons as aforesaid by the judicial Magistrate concerned shall be liable for departmental action by the appropriate High Court.âÂ  For further details , consult Lawyers in India.