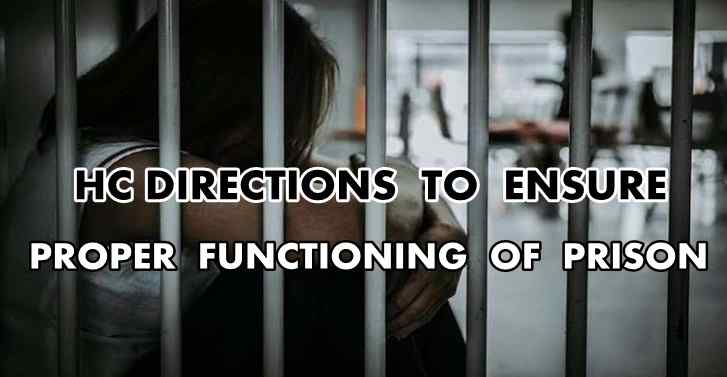 In a recent judgementPunjab and Haryana High Court, the bench of Justice Rajiv Sharma and Justice Harinder Singh Sidhu has passed a series of mandatory directions to ensure that the prisons function properly and that humane living conditions are provided to the cell inmates in the State.

The interim order has been made in a petition filed by one Dr. Swarandeep SinghHe was posted in Central Jail, Ludhiana, at the time of filing of this PIL. During his visits, the petitioner found grave irregularities in the functioning of the jails. Food provided to the jail inmates by the authorities was of poor quality. A person could hardly survive on the food being provided by the jail authorities. The food was cooked in unhygienic conditions. There was no proper ventilation in the jail kitchen. The persons working in the kitchen were suffering from a number of diseases. Ration provided to the jail authorities never reached the jail inmates. There was no proper supply of medicines. The jail inmates suffering from the contagious disease were kept in the same cell where other jail inmates were lodged. Serious sick persons were not admitted to the hospital. They were kept in the cells.sum of Rs. 15,000/ was being charged from the prisoner, who wanted to be admitted to the hospital even though they were not sick. The petitioner was also pressurized to admit in the hospital the jail inmates, who were not even sick. The cartons of medicines coming to jail were empty. Drugs and injections were available in jail openly, however, the jail inmates had to pay exorbitant prices for the same. There was no proper procedure to store the medical files of the jail inmates. The inmates, who spoke against the jail authorities, were tortured he was the story of all the jails in the State of Punjab. Many jail inmates died in jails because of a lack of medical aid. Seriously ill patients were not sent to the hospitals.

In view thereof and based on the suggestions given by a Special Investigation Team, the bench of Justice Rajiv Sharma and Justice Harinder Singh Sidhu directed the State to: Maintain proper ventilation and hygienic conditions in the kitchens and improve the existing kitchens with all modern facilities, including automatic chapati making machines. Provide sufficient food to all the jail inmates as per the diet prescribed by the dietician through the office of CMO and serve the same in proper crockery. Keep inmates suffering from contagious disease separate from other jail inmates. Shift jail inmates to the hospitals from the jail on account of illness only on the basis of certification of CMO concerned. Maintain the medical records of the inmates and keep them in safe custody to ensure that the fundamental and legal rights of the jail inmates are preserved. The court further directed the CMOs to ensure the proper supply of medicines and its distribution to the jail inmates. Provide a sufficient number of CCTV cameras to the District Jail, Ludhiana and other jails in the state, for security of jail premises. The court further directed the Superintendent/ Deputy Superintendent Jail to ensure thatÂ  CCTV cameras are in working condition. ensure hygienic conditions in the jails by deploying a sufficient number of safaikaramchari. The court further directed the Superintendent ofÂ  Jails to provide proper clothes including blankets, quilts in the winter and bed-sheets in the summer, toiletries and, neat and clean towels to the jail inmates. install mobile jammers in all the Central / District Jails in the State of Punjab within three months to stop illegal communication and malpractices. Read moreÂ legal judgmentÂ in Indiaâ¦.
Â