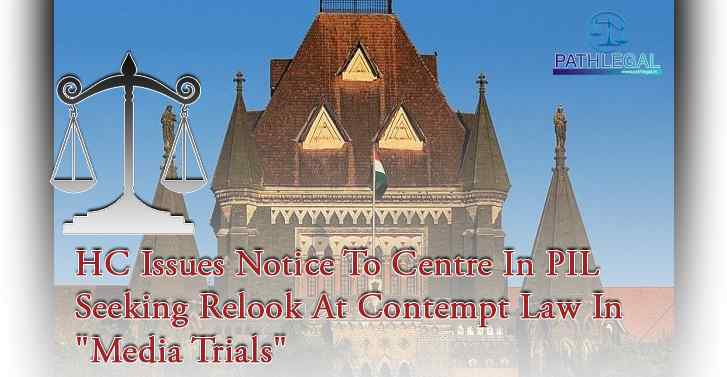 Bombay high courtÂ on Monday issued notice to the Central government in aÂ Public interest litigationÂ (PIL) seeking judicial interpretation of Section 3 of the Contempt of Courts Act in the context of media trials of sensitive criminal matters. The issue raised in a PIL is of expanding scope of the Act and to reconsider the âstarting pointâ of a proceeding.

Section 3 of the Act says it is not contempt of court if at the time of publication, the proceedings, civil or criminal, are not pending.

The starting point of a âcriminal proceedingââ should be the date of filing of a first information report (FIR) instead of the date of filing of a chargesheet at the end of investigation, said the PIL filed by a voluntary organization called In Pursuit of Justice. At a virtual court hearing before a bench of Chief JusticeÂ Dipankar DattaÂ and Justice Girish Kulkarni, petitionerâs counsel Neela Gokhale from Delhi said the issue was significant in the âcontext of present era of media trialsââ.

The PIL referring to the ârecent spate of media reporting in the case of untimely death of actorÂ Sushant Singh Rajputââ seeks to highlight that what it terms as five issues, the first being âdemolishing the faith and confidence of the people in the law and order machinery of the state.ââ

The PIL by the Pune based NGO, made Centre, Press Council of India and the Law Commission parties.
The emphasis was that âEven the Law Commission in its 200th Reportââ has recommended that the starting point of the proceedings should be from the time a person is arrested instead of the filing of chargesheet, as the provision presently postulates.

Anil Singh, Additional Solicitor General who has also been informed of this petition agreed to take instructions on behalf of Union of India and the Law Commission of India.