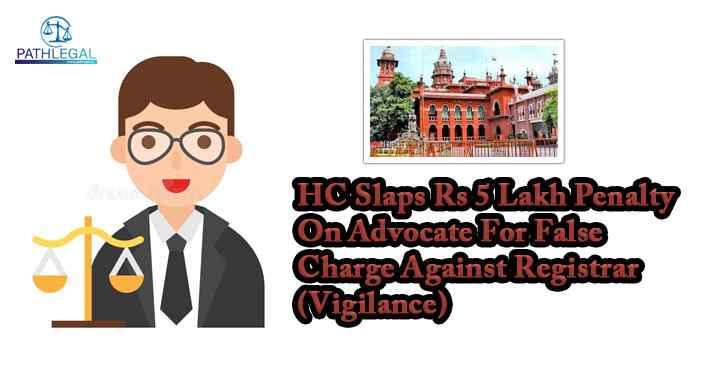 The Madras High Court on Monday took stringent action against an advocate who moved a plea against The Registrar General (Vigilance) R Poornima alleging that she did not possess a class XII pass certificate obtained through the regular course.

The court after finding that the petitioner has made false allegations issued a severe warning to the advocate by imposing a cost of Rs 5 lakhs and also initiated criminal contempt proceedings against him.

The first bench of Chief Justice AP Sahi and Justice Senthilkumar Ramamoorthy also observed that the petitioner has maligned the image of the Registrar General. The court said the advocate B Sathishkumar has committed perjury and is debarred from practising law pending disposal of the contempt plea.

The issue pertains to a plea moved by the advocate that the Registrar General was not qualified to hold the post since she has not undergone formal education of 10+2+3 through the regular course, which is mandatory for the post.

The petitioner's counsel in the video conference contended that the Registrar General without completing class XII went on to do her Bachelor of Commerce and then law through the distance mode of education.

Rejecting the claims made by the petitioner, the bench during the video conferencing showed the education certificates of the Registrar that are furnished in the court. The Chief Justice AP Sahi said that the Registrar has completed her class X in 1982 and Class XII in 1984 obtaining 711 marks from the Bethlehem Higher Secondary School in Ooty. The court also showed the Higher Education degrees, which were also obtained through the regular courses.

The bench observed, "The verification officer has signed the education certificates after comparing with the original certificates. The certificates are all here in court."

The bench constantly asked the petitioner the source of the information for making such a claim against the Registrar General.

The petitioner has moved the petition with an intention to damage the reputation of the Registrar General, which amounts to committing perjury, it added.

The court prior to imposing cost also said that the petitioner has already filed frivolous petitions in the court, which were dismissed.

"The cost imposed against the petitioner of Rs 5 lakhs will be paid to The Registrar General (Vigilance) within 15 days. If the petitioner fails to comply, the district collector of the respective place of residence is directed to recover the cost from the petitioner and deposit in the court," said the bench.