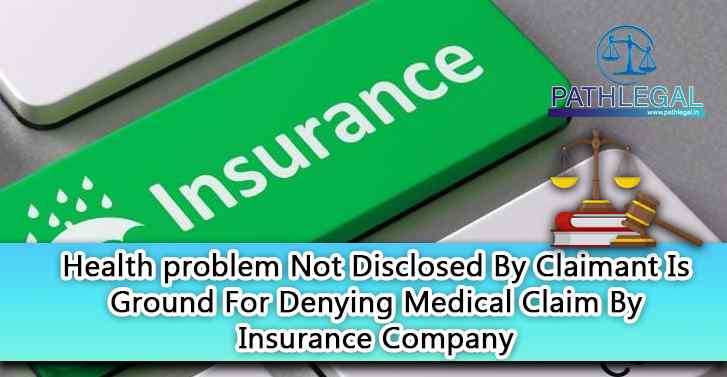 When noted by Justice Dr. Dhananjaya .Y. Chandrachud and Justice Hemant Gupta of Supreme Court that the insured or claimant did not disclose his health problem in the policy form and so when claiming medical claim from the insurance company , the company denied to give the claim to the claimant on the ground is valid . The court allowed the appeal .

Respondent , Manish Gupta , had taken Mediclaim policy from Appellant , Life Insurance Corporation of India. So the respondent had filled out the proposal form for Health plus policy and later, the policy was issued by the appellant , Life Insurance Corporation of India , which was for a sum of Rs. 1,60,000 and it was categorised under âNon-Medical General â. So the respondent had to disclose in the form about his health and medical details inclusive of cardiovascular disease which the respondent had and did not reveal. Further , he underwent a surgery and when he claimed the medical expenses from the appellant company , the company denied to give the claim.

Appellant filed an appeal before the Supreme Court where the court noticed:

âThe documentary material indicates that there was a clear failure on the part of the respondent to disclose that he suffered from rheumatic heart disease since childhood .The ground for repudiation was in terms of the exclusions contained in the policy . The failure of the insured to disclose the past history of cardiovascular disease was a valid ground for repudiation.â This is one of the top legal judgments in India.