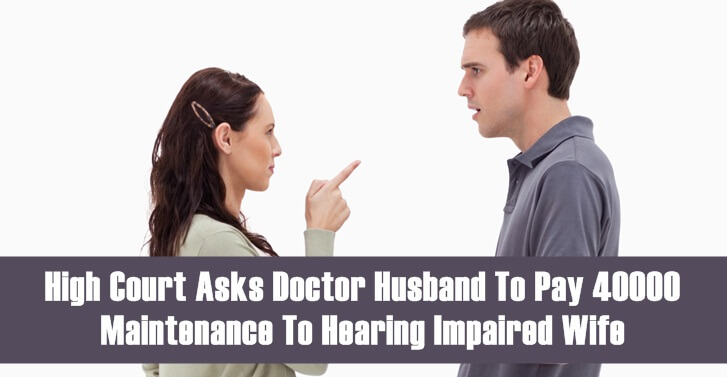 The couple were married in 2005 & after they got separated, the wife filed a petition seeking maintenance. The family court, in February 2019, directed the man to pay the interim maintenance.

Upholding an order by a family court, the Madras high court directed a dentist from Chennai currently working at a software company in Bengaluru to pay Rs.40,000 maintenance to his estranged wife, a hearing-impaired woman, & their teenage daughter.

The manâs appeal against the family courtâs order was dismissed by the high court which held that he failed to submit his correct income from the software company, where he is supposed to be working while the fact remains that, he has a separate clinic in Chennai & engages the services of junior dentists to run the clinic.

The couple were married in 2005 & after they got separated, the wife filed a petition seeking maintenance. The family court, in February 2019, directed the man to pay the interim maintenance.

In the appeal, the counsel for the husband submitted that his client was not successful as a dentist & hence he was working in a software company in Bengaluru. âTherefore, the sum of Rs.40,000 is far & excessive,â the counsel submitted.

Refuting the contentions, the counsel for the wife submitted that the woman is a Class X drop out & suffers from hearing impairment. It was also pointed out that there are no dependents on the man as his father is a pensioner & that the family owns three houses.

The high court said, âIt is a unique & peculiar case to notice the husband being a dentist has transformed as a software professional.â On submission that he has no income through the dental profession, the family court pointed out from that he is capable of paying salaries to junior dentists & rent for the clinic & he wouldnât have done so but for his income from it.