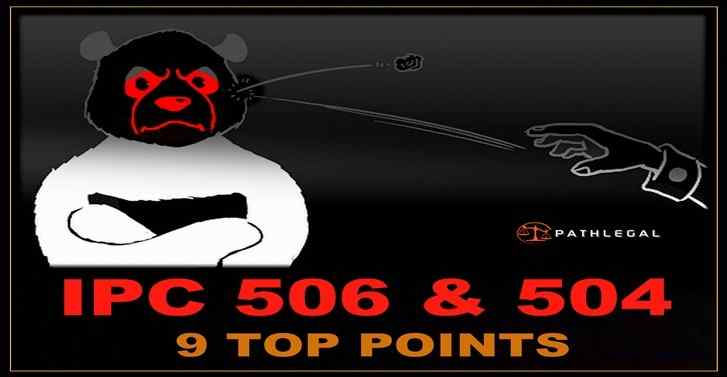 1. Â Â Â  IPC or the Indian Penal code is the main criminal code of India.Â It defines the crime conducted by the citizens of India and punishments for committing them. IPC was implemented in the year 1807 during British rule and except for the Indian Army, it applies to the whole country.Â

2. Â Â Â  Section 504 and 506 of the Indian Penal Code deals with any intentional insultÂ to provoke the breach of peace and punishment for criminal intimidation, respectively.Â

3. Â Â Â  Section 504 of the Indian Penal Code specifies that if a person intentionally insultsÂ another person or intentionally provokes another person intending or knowing that such provocation would ultimately cause him to commit any offense or break public peace then he/she will be charged under IPC 504. If found guilty,Â the Court shall punish the accused with imprisonment which may extend up to two years, or with a fine, or with both.Â

4. Â Â Â  Section 506 of the Indian Penal Code specifies that if a person intimidates anotherÂ person with murder threats, rape threats or any threats directed towards his life, property or family then the person will be charged under IPC 506.Â Â

7. Â Â Â  An accused charged under IPC 506 if found guilty will be punishedÂ with imprisonment which may increase up to seven years, or with fine, or with both.Â

8. Â Â Â  Another point to keep in mind is that IPC Section 506Â doesn't rely much upon witnesses. If the complainant by any means proves in the Court that they threaten her then it can get dangerous for the accused.Â

9. Â Â Â  The offense under Section 506 IPC continues to be bailable and non-cognizable.