If Rape Accused Marries The Victim, Will The Case Be Quashed? 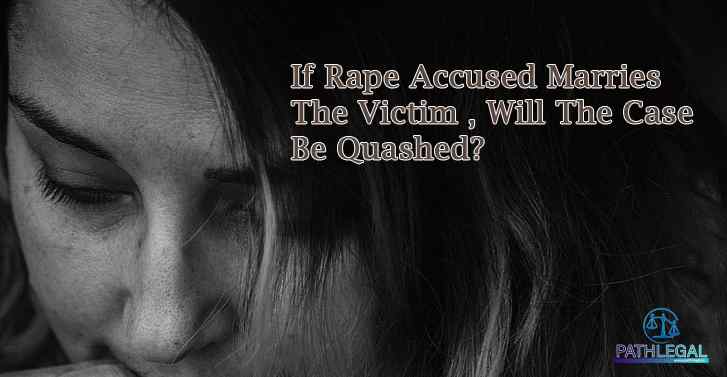 Whenever there is a crime of rape is committed, a case is filed. But what if the person accused of raping has married the victim and if so, will the case charged against the accused be quashed or not?

In the case of: Ashiq N.A. vs. State of Kerala where the rape âaccused was convicted for committing offences as per Section 366A, Section 376 of Indian Penal Code, 1860 and Section 3(a) read with Section 4 of the POSCO Act, 2012, by the Additional Sessions Court, Ernakulam. The rape-accused and the victim had sorted out the matter peacefully and got married under the Special Marriages Act, 1954, and have a child out of the marriage. So application was filed before the Kerala High Court to quash the proceedings against the accused. Justice Alexander Thomas of Kerala High Court noted that Section 376 of the Indian Penal Code is a very serious offence and that the case proceedings cannot be quashed even if the accused and victim have resolved the matter and remarked:

But in the case of State of M.P. vs. Madanlal where Justice Dipak Misra noted that :

â â Further, a compromise entered into between the parties cannot be construed as a leading factor based on which lesser punishment can be awarded. Rape is a non-compoundable offence and it is an offence against the society and is not a matter to be left for the parties to compromise and settle. Since the Court cannot always be assured that the consent given by the victim in compromising the case is a genuine consent, there is every chance that she might have been pressurised by the convicts or the trauma undergone by her all the years might have compelled her to opt for a compromise. In fact, accepting the proposition will put an additional burden on the victim. The accused may use all his influence to pressurise her for a compromise. So, in the interest of justice and to avoid unnecessary pressure/harassment to the victim, it would not be safe in considering the compromise arrived between the parties in rape cases to be a ground for the Court to exercise the discretionary power under the proviso of Section 376(2) IPC.ââ For more details, please contact Lawyers in India.