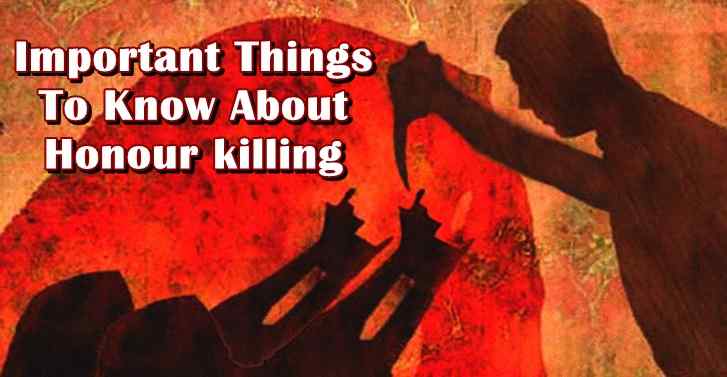 What is honour killing?
It is a murder of a member of a family due to the perpetrators belief that the victim has brought shame or dishonour upon the family or has violated the principles of community or religion.Â Â

Though 'bail not jail' is a dominant principle of criminal law practiced by only mature democracy. As thousands of undertrial prisioners are languishing in jail for want of bail orders from trial courts as the prisioners are without resources, financial and political.

But still recently, the Honarable Supreme court has stated that the basic rule of ' bail and not jail' ( which was pronounced by Justice V.R. Krishna Iyer in a 1977 judgment) does not apply to the henious crimes like honour killing, and in such cases it should be ' jail and jail'. As the honour killing is killing the individual liberty and freedom of choice. It does not justify the reason like killing someone in self defence or out of fear of losing our own life or under intoxication. It has to be borne in mind that when two adults consensually choose each other as a life partner it is a manifestation of their choice which is recognised and ensured under article 19 and 21 of the constitution. It is the constitutional right having the sanction of the constitutional law and that has to be protected and it cannot succumb or fail to the conception or abstract ideas of any class honour or on the notions of people that has no legitimacy. The vilest crimes are committed in the name of defending the honour of a family or women. To protect does not mean to kill the family member or anyone else, but to protect their dignity and respect their choice and selection of leading their lives.

Laws are equal for all the citizens of India and all are equal before law but inspite of this the law is unable to prevent it in many places, and it can only be prevented when there is a change in the mindset and mental attitude of people. Those people place the caste, religion, gotra, clan etc above one's life. Laws can punish the criminal, but cannot prevent the crimes to happen.Â

In March 2010 a Karnal District Court sentenced the five perpetrators to be executed, the first time an Indian court has done so in an honour killing case. case.(The ManojâBabli honour killing case was the honour killing of Indian newlyweds Manoj Banwala and Babli in June 2007 and the subsequent court case which historically convicted defendants for an honour killing.) The khap panchayat head who ordered but did not take part in the killing received a life sentence and the driver involved in the abduction was given a seven-year prison term. The Indian media and legal experts acclaimed it as a "landmark judgement", a victory over these infamous assemblies, which acted for years with impunity as parallel judicial bodies.

Hence, according to Home Minister P. Chidambaram, the UPA-led central government was to propose an amendment to the Indian Penal Code (IPC) in response to the deaths of Manoj and Babli, making honour killing a "distinct offence" and a henious crime with a suitable punishment.
It is the most inhuman and irrational crime. These are mostly carried out on the order of khap panchayats who declared it as an offence and delivers it's judgment without having any legal authority. These are against the Indian laws, they have no right to declare any act, an offence or crime and pass an order to execute anyone, much less an innocent couple who had fallen in love and want to get married. This is wholly illegal and has to be fiercely ended. There is nothing honourable in honour killing or other atrocities and, in fact, it is nothing but barbaric and shameful murder.