In Supreme Court,When The Most Expensive Lawyer Said:"My Lord My Client Is Poor..",The Judge Smiled 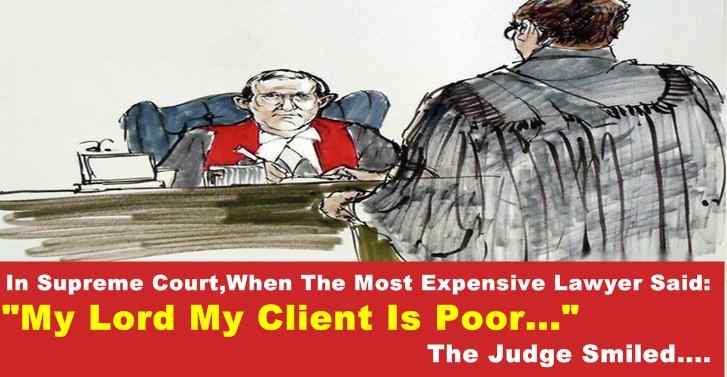 AnÂ interesting moment came in theÂ New DelhiÂ Supreme Court on Friday whenÂ Mukul Rohatgi,Â one of the most expensive people in the country,Â said, "My Lord my client is poor, then the judge smiled."Â On this, Mukul Rohatgi said, "My Lord, now I have started seeing the case of the poor."

Actually, the land acquisition case was going on.Â A bench ledÂ byÂ Justice Arun MishraÂ was hearing the caseÂ through video conferencing.Â During this time, the judge was wearing a mask and was also wearing gloves.Â Senior Advocate and former Attorney General Mukul Rohatgi, appearing on behalf of the party were appearing.Â Mukul Rohatgi said during the hearing that my lord you are taking all the security measures and are happy to hear that.Â Then Justice Arun Mishra said that you are also happy to see that you are connected to your Chamber through video conferencing.Â Significantly, the Chambers were closed in the Supreme Court due to Corona which was opened on Friday after which the lawyers are appearing from their Chambers only through video conferencing.

Rohatgi said, my client is poor, the judge laughed as soon as he heard
When the hearing went ahead, Mukul Rohatgi, while appearing for his client, pleaded the case that his client is poor and he should be given relief.Â Justice Arun Mishra smiled at this.Â On this, Mukul Rohatgi understood the urgency of the occasion and then said that My Lord, I have now started advocating for the poor.Â Now the legal fraternity has changed.Â We fight for the poor.Â In fact, Mukul Rohatgi is one of the most expensive lawyers in the country and when he pleaded that his client is poor, the situation became such that the judge smiled.